Magnesium is an essential dietary mineral and the second most prevalent electrolyte in the human body. Its primary function is to regulate biomechanical reactions in the body such as protein synthesis, muscle and nerve function, blood glucose level, and blood pressure. 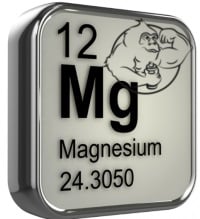 How much magnesium do we need?

Interestingly, an adult human body contains roughly 25 grams (g) of magnesium, with around half of it present in bones, and the other half in soft tissues. The recommended intake for an adult male is around 400 milligrams (mg) per day, and 320 mgs for females.

The most common food sources of magnesium are leafy green vegetables, nuts, legumes, and beans. Additionally, some animal proteins contain significant amounts of this mineral. However, the top magnesium containing foods are almonds, spinach, cashews, peanuts, and soy milk.

Magnesium has two main uses in medicine today. The first is being the primary ingredient in some laxatives that are taken four times per day, where it will typically be dosed at 500 mgs per tablespoon. This amount of magnesium is well above the recommended daily dose, but we need to remember that much of this magnesium is not absorbed due to the laxative effect.

The other medical use of this essential mineral is heartburn relief. For instance, the product “Extra-Strength Rolaids” contains 55 mgs of magnesium (as magnesium hydroxide) per tablet.

Studies in the U.S. have shown that only 25% of Americans take in the recommended daily amount (RDA) of magnesium, while as much as 55% fall below that amount. What’s more, 20% are significantly deficient in magnesium because they get just half or less of the RDA.

Unfortunately, much of this is attributed to poor diet and the destruction of soil from industrial farming. As a result, many of the foods grown today do not have the amount of minerals that they used to before industrial farming, which is when chemical pesticides became popular and widely used.

Another factor contributing to such a widespread deficiency of this mineral is the fact that testing for this condition is very tough, since only 1% of magnesium is found in the blood. In fact, doctors will typically rely on a series of questions and symptoms when looking at the potential problem. Therefore, you need to know that these are some of the things that can cause a magnesium deficiency:

These behaviors may lead to symptoms like anxiety, times of hyperactivity, difficulty sleeping and staying asleep. Furthermore, some other symptoms can include muscle spasms and facial tics. Hence, if you experience any of these issues, magnesium supplementation may be a good idea.

As mentioned in the beginning of the article, magnesium plays an important role in various enzymatic reactions such as fat burning, protein synthesis, and muscular contraction/relaxation. However, the most important thing it does in relation to bodybuilding is the synthesis of the body’s “currency” of energy - adenosine triphosphate, better known as ATP. This process requires magnesium-dependent enzymes called “ATPases,” so basically the body would cease to function without magnesium.

Magnesium plays a very significant part in a great variety of functions within the body. Thus, it is important to ensure you get enough of it, and the best way of doing this is to eat a diet rich in green leafy vegetables, nuts, and legumes. Obviously, supplementation with a good quality multivitamin will be extremely beneficial.

It is important to keep in mind that although magnesium is not a direct cure for high blood pressure, diabetes, stroke, or kidney problems, it does play a crucial role in how the body prevents and deals with these ailments. Therefore, it is best to make sure we have enough magnesium in our bodies, rather than risk being deficient and having issues like those described in the article.

Want to read about Magnesium on our forums? check out these threads: