Marcel Reece is a professional (pro) fullback for the Oakland Raiders in the National Football League (NFL). Unfortunately, he is currently suspended for using performance enhancing drugs (PEDs). Yet, Marcel is an incredible athlete - he has played football, basketball, and track in high school. What's more, he won all league honors as a wide receiver.

After playing in community college and showing promise at wide receiver position, Marcel Reece earned a scholarship to play at the University of Washington. There, during his senior year, Reece hauled in 39 catches for 761 yards, coupled with 8 TD's. Additionally, he was a sprinter, setting his record at 49.8 seconds in the 400M dash during his senior year.

Interestingly, in spite of good measurables for a wide receiver in his pre-NFL draft, Reece had modest statistics in college. He stood at 6 feet tall, 231 pounds, clocked a 4.42s 40 yard dash and showed a 36.5inch vertical. However, this was not enough to earn him a call on draft day in 2008, and he became a free agent mostly because he was considered too heavy to play receiver, but yet too small to play tight end. Hence, a player who does not quite fit a position is considered a 'tweener,' and typically gets overlooked by teams who don't want to burn a draft pick on someone who has to learn a new position.

Reece had very good athleticism for his size, so the Miami Dolphins gave him a shot in his rookie year. Nonetheless, the team ultimately released Marcel after he failed to make their roster. Eventually, he was picked up by the Oakland Raiders, who tried him out at different positions.

As a result, he had to spend the next 2 seasons on the practice squad, where he learned how to play a totally new position for him – fullback. In the process, Marcel bulked up to 250 pounds, since the fullback position required him to have the ability to block. 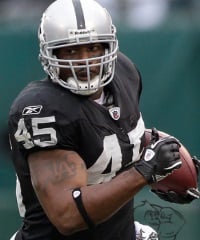 Consequently, Marcel emerged as the starting fullback in the 2010 NFL season for the Raiders, and his receiver skills made him a potent weapon out of the backfield, where he would be mismatched with a much slower linebacker. Furthermore, Marcel's speed gave him a huge advantage, and he was easily considered one of the fastest fullbacks in the NFL, sometimes requiring a safety to help cover him. Additionally, he would also play running back as well, filling in for guys who were injured. All in all, in 6 seasons as a starter he compiled 844 yards rushing, 2000 yards receiving, along with 15 total TD's. Therefore, it is not surprising that he was selected as a fullback for the pro bowl 4 straight years.

At the end of the 2015 season Reece was caught using performance enhancing drugs, so he got suspended for the final game of the season, plus 3 additional games in 2016. Moreover, he also had to give up his spot on the pro bowl - a high honor given to players voted by the fans and peers.

Marcel Reece claimed that he took a legal plant root extract called Umcka, but then it converted to methylhexaneamine (DMAA) after ingestion, which is on the banned list. DMAA is a stimulant/energy booster (derived from amphetamines/speed), and it is not allowed in the NFL.

Speculation on what used

In no way is there evidence of this, but based on speculation we can take an educated guess about his drug use. The NFL has a policy of not saying publicly what a player failed his test for. In spite of the fact that Reece made the assumption of failing for DMAA use, based on his sheer size we can speculate that he was using anabolic steroids and growth hormone. Therefore, trenbolone, testosterone, and an oral steroid like dianabol would be good options for someone looking for size and strength, and not worried about long range speed.  Also, don't forget that HGH use is probably the number one problem in the NFL, so that might be on his menu too.

Want to read about Marcel Reece on our forums? check out these threads:

*DISCLAIMER: The cycle above is our opinion only, this is for information and entertainment purposes only.  There is no proof Marcel Reece used steroids or hgh.  All information expressed is per 1st amendment rights, this article is in compliance with all legal articles of free speech.