Oliver Dziubak, an Olympic javelin thrower turned pharmacist, has been spared jail by a district court. The 35-year-old, who made his Olympic debut in Athens in 2004 and won bronze at the 2006 Commonwealth Games, illegally sold anabolic steroids taken from his Kalgoorlie pharmacy. 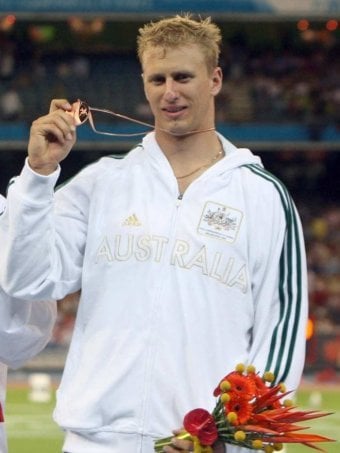 Dziubak was fined $2500 after he admitted to selling Testosterone to a man without a prescription in January last year. Dziubak took the steroids from one of four pharmacies he owned at the time and intended to use them himself in an attempt to regain his physique. Dziubak claimed his former wife Brooke suggested they needed to be got rid of after he did not like the effects of steroids. Brooke arranged the $500 sale after telling Oliver she knew somebody who would buy the steroids. The steroid sale was completed by the former elite athlete.

Both Oliver and Brooke Samantha were registered pharmacists with the Australian Health Practitioner Regulation Agency (AHPRA).

It was revealed by Detective Constable Paul Lines that a search warrant was executed by Kalgoorlie detectives at the couple's home and "numerous exhibits" were seized including testosterone injectable steroids and oral steroids. The Detective Constable had also added the pair had been supplying anabolic steroids to a "local identity" and added the charges were serious and concerning as the accused held "a position of trust in the community" as pharmacists.

Defense lawyer Linda Black remarked the couple were in the middle of a messy marriage break-up at the time and used to engage in the habit of going to police to complain about each other. The defense lawyer also remarked it was after Brooke falsely accused her former husband of breaking into one of their pharmacies and Oliver was questioned that text messages showing evidence of the deal were revealed and they were both charged. Charges against Brooke were later dropped by the prosecution that Oliver felt was “unfair”, according to the Olympian's lawyer.

Oliver was banned by the Australian Health Practitioner Regulation Agency from practicing as a pharmacist. He, however, is now permitted to run one of his pharmacies in Kalgoorlie on the condition he does not dispense anabolic steroids.

Judge Anthony Derrick, announcing the decision, said the offence of Oliver Dziubak was serious but fell at the bottom of the range of seriousness of offences involving the sale of supply of prohibited drugs. The district court judge said once you decided not to use the testosterone, then obviously you should have either taken it back to the pharmacy or just thrown it out. It was found by Judge Derrick that Oliver Dziubak, while he still laid some blame on his former wife, was remorseful and had accepted responsibility for his conduct. The judge remarked Oliver was a “negligible” risk of reoffending and was of previous good character. The court received character references, including from Kalgoorlie-Boulder mayor John Bowler.

Last year, a pharmacist exposed alleged steroid trafficking racket in Australia. The pharmacist had then told the court a prescription was written by Dr Hoong Pan Sze-Tho of the Melbourne Sports Medicine and Anti-Aging Clinic in Moonee Ponds for 30 vials of Sustanon 250 that is a drug commonly used by people with low levels of Testosterone. Sze-Tho was charged on more than 240 charges, including trafficking anabolic steroids and prescribing testosterone for other than medical treatment.