"Big play Ray" Buchanan was an NFL cornerback, punt returner, and safety for 12 seasons. He got this nickname for his ability to make incredible interceptions and return them for big yardage, which was possible thanks to his blazing speed. However, he is perhaps best known for having a verbal altercation before the 1999 Super Bowl with another big talker - Shannon Sharpe of the Denver Broncos, where he insulted him by saying he resembled a horse face. With a height of only 5'8” and a weight of 185 pounds, Ray was not the biggest player ever to play American Football, but he made up for it because he was very fast and very athletic.

Interestingly, Buchanan was born and played high school football in the same state – Illinois. Due to his on-field versatility (he played both running back and safety), Ray started for his varsity team all four years. What's more, he also was a state champion track and field athlete, as he excelled in the long jump and triple jump.

However, Ray played wide receiver for a first time at Louisville, and then he was converted to defensive back. As a sophomore, Buchanan had 3 interceptions and 59 tackles. The next year he was the defensive MVP of the 1991 Fiesta Bowl with 5 tackles, a fumble recovery, and a TD on a blocked punt. Furthermore, in his final season in college he had a whopping 108 tackles and a single season record of 8 interceptions.

Buchanan was fast and agile, but because of his smaller size some teams passed on him on the NFL draft, and he dropped to the early 3rd round, where the Colts selected him. During his rookie season he started 5 games and had 4 interceptions. Therefore, it was obvious that the Colts had quite a talented player. Yet, Ray's performance did not end there, since in his 2nd season he had an incredible 8 interceptions, 3 of which he returned for touchdowns. Moreover, Ray Buchanan compiled 221 return yards on those interceptions. This made quarterbacks fearful to throw to his side of the field, as he typically lined up as a left cornerback. After the 1996 season, the Colts traded him to the Atlanta Falcons, where he would spend the next 6 seasons (signing a $36M contract during this time), before finishing his career with the Oakland Raiders.

During his career Ray compiled 47 interceptions for 827 return yards with 4 touchdowns. He earned All pro twice, and was selected to the pro bowl. Additionally, he also helped lead his Falcons to the 1999 Super Bowl.

Before the 2002 season, Buchanan, who by then was a player with 10 years of experience, was suspended from the first 4 games of the season for testing positive for anabolic steroid use. The prior 4 years before his suspension, he had 27 interceptions – more than anybody else. Buchanan said it was an "inadvertent mistake," and that he had taken a supplement that he thinks had a "steroid derivative in it." However, we all know that this excuse seems to be the standard one used when a player is caught on doping tests. Unlike many other players who found themselves in the same situation, he apologized to his team and fans.

Since Buchanan was not very big, he probably took steroids to help him be able to tackle the bigger receivers he had to face. Keep in mind that if a tackle is missed in the secondary, it will likely lead to a huge play for the offense, so he needed to bring his opponent down immediately. This is tricky though, as most steroids tend to hurt endurance. He likely took something like winstrol, turinabol, or anavar, which would give him fast twitch, short range speed on the field. Finally, just like all players of that time, Ray Buchanan most probably used human growth hormone (HGH).

This is a possible Ray Buchanan Steroid Cycle:*

There is a possibility that some kind of equipoise or equipoise-related steroid was used. Designer compound most likely. 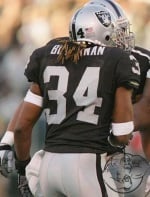 *DISCLAIMER: The cycle above is our opinion on what Ray Buchanan could have used, this is for information and entertainment purposes only. While Ray Buchanan was suspended for using anabolic steroids, there is no direct proof Ray Buchanan used steroids. All information expressed is per 1st amendment rights, this article is in compliance with all legal articles of free speech.