Liliya Shobukhova of Russia, three-time Bank of America Chicago Marathon winner, has been banned for two years. The second fastest women's marathoner in history was banned by the Russian Athletics Federation for doping for “abnormal hematological curves” in her biological passport. 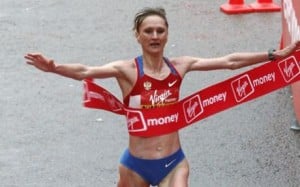 Shobukhova could now be stripped of all three of her Chicago Marathon titles and her 2010 London Marathon win. The Russian athlete won the Chicago race in 2009, 2010, and 2011 and her 2011 winning time of 2 hours, 18 minutes, 20 seconds is the fourth fastest ever, behind three by Paula Radcliffe of Great Britain. After the doping news, Radcliffe wrote on Twitter that Lilya Shobukhova finally exposed as a drug cheat with fraud on so many levels, so much money effectively stolen in appearance fees, winnings and endorsements. She added action needs to be taken to show cheating not acceptable and monies won should be returned and rightful winners recognized. Radcliffe suggested her conviction and two-year suspension was long overdue. Shobukhova's London win and her three Chicago victories will be wiped from the record books.

The news of doping ban was welcomed by Athletics legend Brendan Foster who said this is actually good news and added that the sport is getting more and more aggressive in its pursuit of cheats and if they’re high-profile cheats, even better.

Hugh Brasher, the race director, said in a statement that London Marathon is at the forefront of the fight against doping in our sport and we are very proud to have been the first major marathon to introduce blood testing for all of our elite competitors, prior to each event.

Shobukhova's results after October 9, 2009 have been annulled. She has the right to appeal but she also would be stripped of her 2010 London Marathon title and face demands to repay prize, bonus money, and appearance fees earned during the period affected by the doping violation if she fails to win on appeal against the doping ban. The 36-year-old won $1 million as winner of the World Marathon Majors series in 2009-10 and 2010-11. Shobukhova also won $265,000 in placement prize money and $90,000 in time bonuses from her four Chicago Marathons, including a fourth place in 2012. The appearance fees of Shobukhova in Chicago likely approached an aggregate $500,000. Ban imposed on the three-time Olympian is retroactive to January 24, 2013, meaning she could compete again next January 24. Her suspension is backdated to January 24, 2013 and will end on January 23, 2015.

A statement was released by World Marathon Majors on the ban of Liliya Shobukhova that said any athlete found guilty of a doping offence will be required to repay any prize or appearance money earned at WMM events including WMM series prize money. Nick Bitel, general counsel for the World Marathon Majors, remarked that WMM will continue to hold a stern line and supports all measures to ensure the integrity of the athletes competing in their races and added cheats need to understand that they are not welcome in our sport and that they will be caught.

0 0
Previous ArticleArmstrong Not To Be Blamed For Cycling’s Doping Culture, Says HincapieNext ArticleBenefits of a Unilateral Routine