Samir Bannout is a Lebanese Mr. Olympia winner who is an IFBB Hall of Famer. He sported one of the most aesthetic physiques of his era. He was born in 1955, and his peak stats were 5'7" and 215 pounds super lean. He was nicknamed the Lion of Lebanon, and he was also known for having an incredibly thick back which was nicknamed "Lebanon Cedar back".

Born in Beirut, Lebanon, Samir became interested in bodybuilding one day while riding his bicycle by a store and seeing a bodybuilding magazine in the window. He stopped and looked at it and wanted to achieve that body himself. Lebanon has a rich weightlifting culture, so it was easy for him to find a gym as a teenager and this lead him to start lifting weights.

Samir went all-in by becoming a professional bodybuilder and would travel to the US to compete in the Mr. Universe medium category. He was only 19, which made him the youngest competitor, but he still placed a surprising 7th place. He would end up immigrating to the USA to chase his dreams.

Five years later, he would earn his pro card by winning the IFBB World Amateur Championships. The next 3 years he competed in 11 of the toughest competitions and 3 Mr. Olympia's. He would place in the top 10 in most of them, and in 1982 he earned 4th place at Mr. Olympia.

At the 1983 Mr. Olympia, held in Germany, Samir stepped on stage with Lee Haney, Frank Zane, Bertil Fox, Ed Corney, and the other best bodybuilders of the 80's beating them all to become the 6th man to win Mr. Olympia. It was only his 4th attempt at the title. It should also be noted that he only weighed in at 196 pounds, becoming the last Mr. Olympia overall champion to weigh under 200 pounds, and effectively ending the aesthetics era. From there on, monsters like Lee Haney would be the norm to win. In fact, Samir would place just 6th the next year at Mr. Olympia.

After his 1984 Mr. Olympia competition, the IFBB suspended Samir for 3 years to punish him for competing at the WABBA, which was a rival federation. However, we would later find out that Samir had gotten into a very rough argument with an IFBB official over unfair treatment. It appeared that politics had ruined any Mr. Olympia repeat.

Samir would take it all in stride and would win the 1985 and 1986 WABBA World Championships. He also placed in the top 10 at many Grand Prix competitions and ended up competing at the Mr. Olympia again in 1988 where he finished 8th.

His last competition before his first retirement was at the 1996 Masters Mr. Olympia where he placed 6th. At 56 years old, he decided to compete at the IFBB Pro World Masters and finished in 11th place.

Samir has an Instagram page https://www.instagram.com/samirbannout/?hl=en . The page features pictures of him during his glory years and magazine covers.

This video shows you Samir during his peak competition days. His physique was incredible:

Samir sat down with Ric Drasin for a lengthy interview about his early years and his future. Although the video is about 10 years old it is still very cool:

For those who don't think you can still look great as a senior, watch this video. Samir still looks great in his 60's!

He looks so good at an old age that he guest posed at the 2012 Joe Weider's Master Mr. Olympia:

At his senior age he has dabbled in supplement companies (BN nutrition), infomercial exercise equipment, and reps for Old School Labs: oldschoollabs.com/samir-bannout-brand-ambassador/

Samir's background was actually powerlifting, and his uncle was one of the top powerlifters in Lebanon. A friend felt that Samir would be a better bodybuilder, so Samir tried that instead and it worked out well for him. So Samir is a big advocate for trying new things and not being stubborn with weight training. In addition, he doesn't believe in overtraining, and he says he actually delayed his progress when he was younger because he would overtrain. 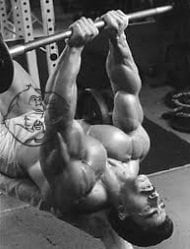 His favorite workout split was a 3-day split:

Samir said he was a hard gainer at a young age, yet this worked to his benefit as he was always able to stay lean. However, his secret to staying super lean was cutting out all carbs before his competitions.

His diet was chalk full of chicken, fish, and vegetables. That is it. He also made sure he drank plenty of water, and he was obsessed with maintaining an electrolyte balance. Early in his career, he blamed his failures on water retention due to not understanding how to balance his nutrients like potassium and salt.

Samir's advice to young bodybuilders is if you do not feel like eating or drinking, you still need to feed it minerals.

Samir believes in 'less is better', and his anabolic usage likely demonstrated that. He did not use very much drugs, and it probably cost him, going up against the emerging monsters of the late 80's and early 90's. We can speculate his steroid usage looked like this:

Join the Evolutionary.org forums and have your say on Samir Bannout Steroid Cycle!

*DISCLAIMER: The cycle above is our opinion on what Samir Bannout could have used, this is for information and entertainment purposes only. There is no direct evidence that Samir Bannout used steroids or any other drugs. This article is our freedom of speech.