Bertil Fox was one of the most impressive British bodybuilders of the 70's and 80's. He was born in 1951, and spent 25 years as a pro bodybuilder. He earned the nickname Brutal Bertil. His scary big physique was 5'8" and a whopping 245 pounds, with 22" arms. 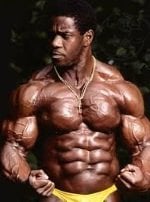 Fox was born on the British Caribbean island of St. Kitts. This beautiful island has a diverse population of people from Africa, Pakistan, Lebanon, Britain, and Portugal. Soon after his birth, his family moved to England. As a child, Fox got involved in sports and was very good at them, but his true passion was bodybuilding and he excelled in it as a teenager. His father died when he was just 14, so he used that as motivation to hit the weight room hard.

At just 18 years old, he won the 1969 Junior Mr. Britain. He would follow that up with 2 straight wins smashing his opponents easily. He won the 1971 Junior Mr. Europe. A few years later he would win Mr. Universe and Mr. World.

Joe Weider had been spending a lot of time recruiting the best British and European bodybuilders and convincing them to move to the USA to further their ambitions. Fox would move to California and shoot for IFBB competitions. In 1981, Fox got a very strong 5th place at the Grand Prix Belgium. He was just now turning 30 years old, and the next year he was runner-up at the Night of Champions and 8th at Mr. Olympia. 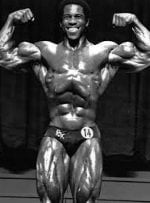 Murder or self defense?

On September 30, 1997, Fox had an altercation with his ex-girlfriend model and her mother at their dress shop in downtown Basseterre, St. Kitts. While struggling with his gun he ended up shooting both of them near the door as he was getting kicked out. He claimed to the court that it was self-defense, but an employee implicated him by saying that Fox wasn't defending himself. 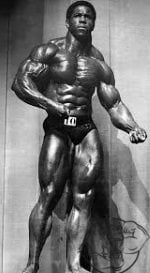 He was sentenced to hanging, but after an appeal, it was reduced, and he now spends his time at the west wing of the Basseterre prison reminiscing about his glory days of bodybuilding, at the Mr. Olympia, next to Samir Bannout, Lee Haney, and Frank Zane.

You can watch a documentary done on Fox here which takes you through his life story:

Another video shows how massive his physique was, he was a very large man:

Here is a video of him benching 500+ pounds like it was nothing:

His nickname of Brutal Bertil wasn't because he was a killer, but it came from his intense workouts which nobody could match. Fox believed in lifting heavy, heavy, and heavy. He routinely benched 500 pounds for reps, and all his other compound lifts would blow away everyone else at his gym, even if they weighed more than him. 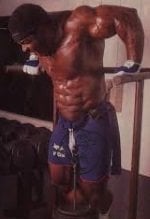 His workouts were 30 sets for each muscle group. Even if he was focusing in on his arms, he would smash them heavy for 30 sets no problem. He believed this helped him get so huge and strong.

Fox believed in eating big to be big. This meant a lot of protein and he would routinely eat a dozen eggs at a time. His 2nd favorite food was steak.

He would take in 400g of protein a day. His carbs of choice were sweet potatoes and rice.

There has been speculation from the media that Fox committed murder because of roid rage. Although this is impossible to prove, they've managed to connect other athletes to crimes to blame steroids too. We can speculate that during his prime years in the early 80's Fox used something like this.

Join the Evolutionary.org forums and have your say on Bertil Fox Steroid Cycle!