Who was Lee Haney?

As incredible as it may seem, Lee Haney was the first man to break Arnold Schwarzenegger’s record of Mr Olympia wins. It was a true achievement, since Arnold won the Olympia 6 consecutive times, and won another title five years after retiring in the highly disputed 1980 contest. Meanwhile, Lee Haney won it for 8 years in a row – from 1984 to 1991. Interestingly, in October 2005, Ronnie Coleman tied Haney's Mr Olympia record, becoming only the second person in history to win eight consecutive Mr. Olympia titles. 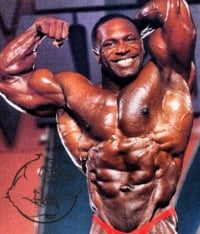 Haney’s approach to bodybuilding was the opposite of Arnold’s in that he never thought of it as a stepping stone to fame. He had nothing to prove and nothing to overcome. Therefore, Lee simply enjoyed working out, the changes it made in his body, and just kept improving. As a result, it soon became evident that he had extraordinary potential.

What was Lee Haney’s training method?

Lee Haney’s vision of training was old school — lots of volume and heavy weights. In fact, he employed the “pre-exhaust” system of training, where he’d pump a muscle first in the workout, and then hit it hard with compound movements with heavier weight. For example, when training legs, he would start with 5 sets of leg extensions, and 5 sets of leg curls, doing up to 15 reps a set. Afterward he would do squats in the 6-8 rep range using “just” 225 pounds — far less weight than he could normally handle, but the previous “pump” sets made these 225 pounds feel like 350 pounds! This way Lee could stress the muscles without using maximum pounds, which was definitely good for his joints.

Haney never spoke about drug use, presumably due to the fact that he is a devout Christian and wants to always present himself in a positive and wholesome light. However, back in the late 80’s and early 90’s the steroid scene was changing dramatically. Since steroids were no longer legal, there was a black market surge. Hence, none of the steroid users ever really knew what they were getting. Unfortunately, there was no internet, foreign pharmacies, or generic companies. Consequently, it was mostly whatever some guy at the gym had, or what was available through some dicey classified ad. Thus, it is not surprising that at least half of all purchases were fakes. Furthermore, many bodybuilders developed abbesses from non-sterile gear. What's really shocking, is that HGH was extracted from human cadavers, leading to some bodybuilders to contract diseases that were present in the corpse.

Even the supplement companies were trying to sell all sorts of bogus concoctions, which they claimed to work like steroids. It wasn’t pretty, and it was very much a free-for-all in regard to whatever roids anyone can get. In fact, it was also a time when dosages started to soar. Thus, it’s reasonable to assume that Haney used enough steroids to keep up with what the competition was using. In spite of the fact that there were a lot of designer drugs coming along, the Deca Durabolin and D-bol combo was still the “go-to” stack of most bodybuilders, though one should note that Haney never showed signs of gynecomastia the way so many pros did at the time prior to the use of anti-estrogens.

Today, Haney has his own program called "TotaLee Fit with Lee Haney," where he teaches the importance of both physical and spiritual growth. One of his most famous quotes is that we should "train to stimulate, not annihilate.” 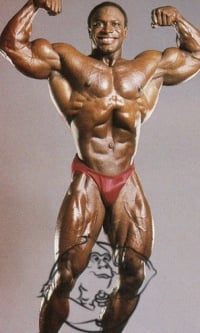 *DISCLAIMER: The cycle above is our opinion on what steroids Lee Haney could have used during a potential cycle, this article is for information and entertainment purposes only.

Tags: did lee haney use steroids