Triacana is a thyroid product that is derived from a metabolite of T3, which is called tiratricol.  This thyroid product is marketed under the brand names Triacana, Tri-cuts, and Triax. 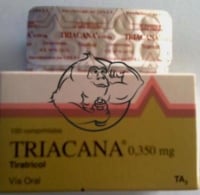 The two main hormones produced by the thyroid gland are T3 (L-triiodothyronine) and T4 (L-thyroxine).  Interestingly, the body's thyroid produces mostly T4, which is then converted via enzymes into T3.  These hormones are very important because those people suffering from hypothyroidism (an underactive thyroid gland) have a tough time losing fat without a proper T4/T3 balance.  Therefore, people with this condition seek to speed up their metabolism by using thyroid medication.

Nonetheless, not only those with hypothyroidism use thyroid medication.  As a matter of fact, it can get challenging for athletes and bodybuilders to maintain low body fat, since the body naturally wants to keep the fat on for survival reasons.  Hence, they will also seek to use thyroid medication in order to speed up their metabolism and keep body fat low.  It is not a secret that anyone who competes in bodybuilding is always seeking a low body fat, which would allow them to show off their muscle cuts and vascularity once they reach the stage.

Triacana started gaining popularity in the 1970's as a fat burning compound.  However, it is milder and essentially worthless compared to T3 or T4 when it comes to affecting metabolism, and it will still suppress TSH (thyroid stimulating hormone).  Consequently, the fact that triacana doesn't work as well as T3, and yet suppresses TSH, makes its advantages questionable, even more so since it is no longer available over the counter.  Originally, users were under the impression that after cycling triacana the thyroid would rebound much faster, which has shown to be false.  In fact, in human trials, both males and females needed 2-4 months to recover their TSH function after a triacana cycle.

To make matters worse, some users have said they actually did not even burn fat when using triacana.  Instead, they felt fatigued and run down.

Why did triacana get so popular in Europe?

The answer to why triacana gained popularity in Europe, dates back to the 70's, and a very well known pro bodybuilder from Paris.  According to his claims, he used triacana to burn a lot of fat, and managed to keep his muscle on it.  Nevertheless, several skeptics have claimed since then that the competitor was fooling others into thinking he was telling the truth in order to get an edge over them.  This was obvious simply because triacana has been shown to be a failure at raising metabolism and fat burning.

Triacana comes with a host of side effects, which includes jitters, sweating, dizziness, irregular heartbeat, and restlessness.

The recommended starting dosages were around 1 milligram (mg) per day, and one would work his way up to a maximum of 5mgs per day.  Due to the very short effects of the drug, you would want to dose it 2-3 times per day.  Regarding the optimal cycle duration, the maximum length was up to 3 months only, followed by 3 months off.  Furthermore, it is also recommended to taper off the drug instead of abruptly stopping its usage.

Triacana is more popular in Europe than in the US, and before the FDA stepped in and banned it, this thyroid product was available over the counter in supplement stores.  Today, it can be purchased online through various sources from the black market.  Though, I don't recommend using this useless drug.

Want to read about Triacana on our forums? check out these threads: