Boldenone Undecylenate (Equipoise - EQ) was originally produced by the company CIBA in the 1950’s under the brand name Parenabol. This is the only time it has ever been produced for human use. Production continued until the 1970’s until it was discontinued .The compound is now most commonly referred to as “Equipoise” (name owned by Fort Dodge Animal Health), as a veterinary steroid.  It was intended to be injected into the animal (mainly horse and cattle) every 6 weeks. EQ is now only produced as a veterinary or underground laboratory steroid. 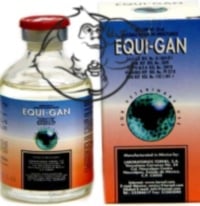 Chemically, EQ is very similar to Dianabol. This however is where the similarities stop. The 17AA that is present in Dianabol, which makes it the oral it is, is replaced by a long Undecylenate ester. This makes it perfectly soluble in oil and actually in raw form is somewhat like a thick syrupy substance.

Side effects of EQ are generally very mild. Saying that, it is still a steroid and may cause hair loss (male pattern baldness), unwanted hair gain, acne, oily skin, increase in appetite, and increased red blood cell count.

EQ is a steroid that can be and often is run by both men and women. A typical male dosage would be around 600mg per week total. These would be split into two separate 300mg injections. Some more experienced bodybuilders run this compound as high as 800-1,000mg per week. Women run EQ between 50-80mg per week. A cycle of EQ should run at least 16 weeks up to 20 weeks. The reason for this is the long ester. Users will not start to notice effects until around 8 weeks of usage.

The half-life of Equipoise is 14 days. The detection time can be anywhere from 3 months up to around 18 months. Some users actually can have detection up to a few years.

Equipoise is a very long ester which allows for slow, clean, lean gains in muscle mass. These traits allow it to be an effective compound when used for “cutting”. However, it can also be effective in bulking because of the increase in appetite. Overall, EQ is one of the milder steroids as far as side effects and slower as far as muscle gain. It is a great choice for someone venturing into their second or third steroid cycle. 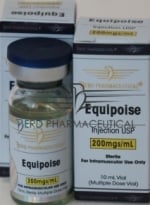 Want to read about Equipoise on our forums? check out these threads: