Brock Lesnar is a Canadian-American professional wrestler (WWE) and mixed martial art (UFC) fighter. He is very famous for his impressive size - his listed height and weight as a pro wrestler was 6' 3" and 286 pounds. Interestingly, he also is considered to have one of the largest hands in MMA history.

However, it was not the size of his hands that made the news recently because Brock tested positive for a banned substance in two tests, and his only comment to this situation was "We will get to the bottom of this." 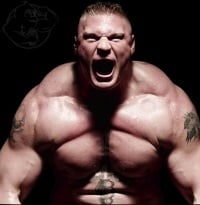 Lesnar was born in the rural town of Webster (South Dakota) on July 12 1977, and he was raised on a dairy farm. As a teenager of German descent, he decided to join the National Guard, and then worked in construction.

What's more, he was always a keen athlete, and in high school he played football and wrestled. As a matter of fact, in wrestling Brock was a 3rd place finisher during his senior year. Lesnar continued to wrestle in Junior College, and he parlayed that into a scholarship to attend the University of Minnesota, where he excelled in wrestling by winning 106 out of 111 matches.

The WWF (now called WWE), signed with Lesnar in 2000, and he was groomed for 2 years before finally debuting on an episode of "Raw," where he showed up through the crowd to attack Spike Dudley. Furthermore, Lesnar made history when he defeated 'The Rock' at Summerslam; being only 25 years old at the moment, he became the youngest WWE champion. Obviously, we know that pro wrestling is scripted, so the bosses felt like Lesnar was a rising star, and wanted to ride his wave of popularity. 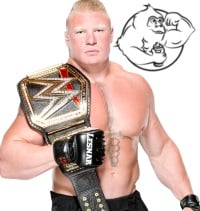 All in all, Lesnar enjoyed several years of pro wrestling popularity, as he fought in the biggest matches with Goldberg, Benoit, the Undertaker, and even the boss himself - Vince McMahon. However, in 2004 he decided to pursue the NFL, where he was signed by the Minnesota Vikings of the NFL, and played defensive tackle. Unfortunately, years away from football and a motorcycle injury made it difficult for him to keep up with the team, and he was cut prior to the regular season.

In the end, after wrestling in Japan, Lesnar came back to the WWE, and again rose to prominence. In fact, he defeated John Cena to become the WWE World Heavyweight Champion in 2014.

Sandwiched in between his wrestling career, Lesnar became an MMA fighter. He fought in Hero's in 2007, where he won his first official match in minute 1 of the first round against Min Soo Kim. Lesnar then signed with UFC, and his first match was in Feb of 2008 against Frank Mir. In this fight Brock lost when Mir secured a kneebar, and forced a submission at [1:30] of the first round. On his next match he faced Heath Herring, and defeated him at UFC87. Lesnar became the new UFC heavyweight champion after defeating Randy Couture at UFC91 via technical knockout in the 2nd round. 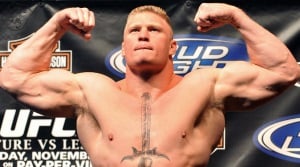 Some time later, Lesnar wanted a rematch with Mir and finally got it. Brock defeated Mir at UFC100 in the 2nd round. Sadly, this match did not contribute to his reputation – after finishing it he celebrated by flipping off the crowd who was hostile towards him, bashing the beer sponsor saying "they won't pay me nothing," and promoting a competitor instead. Nonetheless, he later apologized for his behavior.

In late 2011, at UFC141 Lesnar lost to Alistair Overeem, who had failed a steroids test after the fight, so the loss was controversial. Yet, Lesnar announced his retirement after the loss.

Lesnar halted speculation of a return to MMA on Sportscenter in March of 2015, when he remarked that he could make more money working part time in WWE. However, he surprised everyone after the WWE gave him an opportunity to compete at UFC200, as long as he would return to the company for SummerSlam. This allowed him to fight Mark Hunt on July 9 of 2016, whom he defeated by unanimous decision, taking a record 2.5 million prize.

On July 15 of 2016, Lesnar was told by the USADA that he failed a drug test from June 28. Moreover, the UFC then announced that Lesnar had failed a second sample that was done the day of the match - on July 9, and same banned substance appeared on the test.

Speculation on Drug use

A source has told ESPN that Lesnar failed both times for Clomid (Clomiphene Citrate), which is a selective estrogen receptor modulator or SERM for short. Clomid is used by steroid users to increase hormones in the body by blocking estrogen from looping into the pituitary glands, which leads to an increase in LH, FSH, and total testosterone levels. Therefore, it is possible that if Lesnar used clomid, he was attempting to keep his hormone levels stable while not cycling anabolic steroids. What's more, there is also literature suggesting that Clomid can be used as a masking agent. However, it does not directly cause any type of advantage when it comes to strength, speed, or quickness. 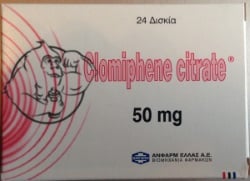 Perhaps, Lesnar got bad advice from a trainer or steroid seller because clomid is detectable for approximately 2-3 weeks, even though it only has a half-life of 5-7 days. Consequently, if he was using clomid for either of the reasons above, then it is obvious that he was also taking other anabolic steroids that the tests did not find. For instance, he could be using short estered versions of steroids or no ester trenbolone, human growth hormone, or testosterone suspension, which can be detected only 2-3 days after being used.

The cycle is likely very short estered or oral only:

It is still too early to know the fallout from this controversy. All we know by now is that Mark Hunt - the man he defeated, has said that he should be paid a portion the prize money given to Lesnar.

Want to read about Brock Lesnar on our forums? check out these threads:

DISCLAIMER: The cycle above is our opinion on what Brock Lesnar could have used, this is for information and entertainment purposes only. There is no proof Brock Lesnar used steroids. All information expressed is per 1st amendment rights, this article is in compliance with all legal articles of free speech.