Chad "Money" Mendes is an American mixed martial arts (MMA) fighter who competes in the featherweight division of the Ultimate Fighting Championship (UFC). Obviously, Chad's stats correspond to his weight category – he is 5'6" tall, weighs 145 pounds, and has a 66-inch reach.

Last month it was revealed that he had failed a doping test, and this week it was announced that he has been suspended for 2 years. This is another huge blow to UFC, since such prominent figures as Jon Jones and Brock Lesnar were also recently busted, and they are awaiting for their corresponding suspensions. 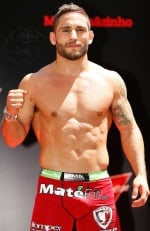 Interestingly, Mendes is of Native American, Irish, Puerto Rican, Italian, and Portuguese descent. Chad was born and raised in California, where he was an excellent wrestler in high school, competing in the lightweight divisions. As a result, his wrestling talent gave him access to college at Cal Poly, where he had a solid 64-14 record, including a whopping 30-1 record as a senior.

Mendes joined Team Alpha Male and trained with that team to work his way into the Palace Fighting Championship, where he was undefeated. Later on, in March of 2010, Mendes made his World Extreme Cagefighting (WEC) debut against Erik Koch, but he suffered a bad cut over his eye during the match. Nevertheless, he fought through the problem and won the fight by unanimous decision. Then, at the WEC48 Mendes took down Anthony Morrison via a first round submission, and he would win his next 2 fights in the WEC.

In October of 2010, WEC merged with the UFC, so all the fighters were transferred over. Consequently, Chad's UFC debut was at UFC126, where he beat Michihiro Omigawa in a close match. However, his first major fight would be against the UFC Featherweight Champion Jose Aldo. Unfortunately, this would also be his first pro loss, as Aldo knocked him out in the first round.

After a series of matches, he would get a chance for a highly rated rematch with Aldo, which took place in October of 2014 at UFC179. This time around, Mendes was ready and he fought a hard match. However, Aldo would win the fight by a very tiny unanimous decision. In spite of the fact that Mendes lost, this fight would win the World MMA Awards fight of the year, and make him a popular figure.

All in all, Mendes would highlight his career at UFC Fight Night63, where he faced Ricardo Lamas in April of 2015, and won by a TKO in the 1st round. His next 2 matches would be losses to McGregor and Edgar, leading him to a current record of 17-4.

In July of 2012, Mendes was charged with battery in a bar fight that took place in California. Deputies said Mendes punched a man in the face, and the bar erupted into a brawl, after which Mendes yelled at officers. According to official reports, Mendes was drunk and was ordered out of the bar, but he decided to return to punch another patron. In the end, Mendes pleaded no contest and paid a fine, while avoiding jail time.

On June 10, 2016, the UFC made an announcement saying that Mendes had a potential doping violation from a USADA 'out of competition' test. Mendes was quoted as saying "I didn't do my homework and that was a big mistake. I own it and I'm going to pay for it." The next month, the USADA reported Mendes tested positive for GHRP-6, and he was suspended for 2 years. Therefore, he will not be able to fight again until June of 2018.

GHRP-6 is a growth hormone releasing peptide that is part of the GH secretagogues family of peptides. When you use this class of compounds, they will release growth hormone in the body on top of the growth hormone that already is made. Generally, it is constituted in a vial and then injected with a small needle subcutaneously at least 1-3 times per day.

Nonetheless, a source would later say that there was a cream that Mendes used for his skin problems, and it contained the GHRP-6 in it, which was highly likely fabricated because no such thing exists.

Aside from the use of GHRP-6, it is very probable that Mendes would be using testosterone suspension and no ester trenbolone, as neither would be easy to detect in a doping test. It is unclear why did Mendes use GHRP instead of HGH, which is detectable for a very short period of time (usually up to 2 days only). Perhaps he was unable to get any, or he wanted to save money, so he went with the more easily detectable GHRP instead. This would prove to be a costly mistake, as he will be out of the ring for the next 2 years. 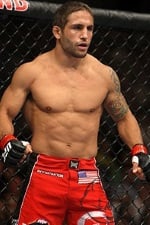 DISCLAIMER: The cycle above is our opinion on what Chad Mendes could have used, this is for information and entertainment purposes only. There is no proof Chad Mendes used steroids. All information expressed is per 1st amendment rights, this article is in compliance with all legal articles of free speech.