Chris Dickerson was a social pioneer in bodybuilding because of his unique combination of factors working against him; race, height, late start and sexual orientation. He wasn't the first 'short guy', as Franco Columbu was only 5'5" and many bodybuilders are 'short'. But none were black, short, started bodybuilding so late and homosexual, which were 4 things that he somehow amazingly overcame. 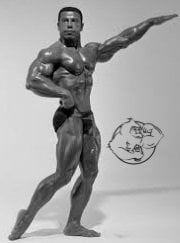 Dickerson was born in racist Alabama in 1939. His mother was friends with Rosa Parks and was the first black female lawyer in the state and only the 2nd to be admitted to the Indiana Bar. His mom taught him to overcome obstacles and wanted him to be well educated instead of worrying about sports growing up. Even though he still loved sports, he took a passion for theater arts and especially singing. Ironically, his singing teacher convinced him to weight train, so that he could boost his singing voice. In fact, he saw a picture of Bill Pearl in a muscle magazine and went to California to see him in person. 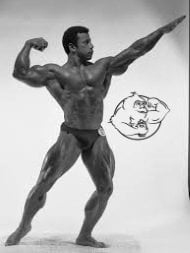 Dickerson did not start to seriously bodybuild full time until he was 24, so critics didn't think he would stand a chance because of the late start. Two years later in 1965, he finished 3rd in the Mr. Long Beach competition. He would then have a string of 12 straight competitions and he won every single one of them.  As a result, he quickly rose to becoming one of the most respected bodybuilders and appeared in magazines by the late 60's. 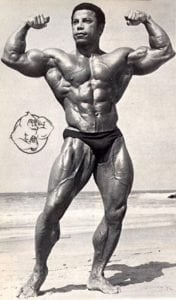 Dickerson would later credit 2 things for his rapid success in the sport. First his attention to proportions and aesthetics, where he made sure he was symmetric. And second, his acting and singing background made it easy for him to be on stage while other competitors were nervous and scared.

Dickerson would have tremendous success during the 70's placing and winning in numerous bodybuilding competitions, but it wasn't until 1979 when he got into the IFBB and targeted Mr. Olympia. By then Arnold Schwarzenegger had popularized the Mr. Olympia and Dickerson was 40 years old, so he knew he was running out of time.

In the 1980 Mr. Olympia, Arnold made a last minute entry into the event and won, with many saying it was based on popularity and not on merit, this robbed Dickerson of the win and he finished 2nd place, with Frank Zane finishing 3rd. Here is a video of the 1980 Mr. Olympia:

The next year Dickerson again fell short losing to Arnold's rival and buddy Franco Columbu, again perhaps due to popularity and not merit. This was the first time Dickerson lost motivation and considered quitting.

After being convinced to give it one more shot Dickerson finally broke the barrier and won in 1982 at 43 years old.

Dickerson believed in supplementation to feed the body. He was a big fan of amino acids, vitamins, and minerals and knew how much he needed to a tee for maximum results. He paid a lot of attention to science, instead of his body, which is a unique approach.

Dickerson didn't believe in high rep/low weight or low rep/heavy weight. He practiced something in between that. He also hated machines and believed in free weights only. His belief was you must build a base and a foundation first, only then can you sculpt the body the way you want to after. He also believed in patience, as demonstrated by his late start in bodybuilding and it taking him 20 years to finally win Mr. Olympia.

We can speculate based on what guys were using in the early 80's what Dickerson used for Mr. Olympia.

Join the Evolutionary.org forums and have your say on Chris Dickerson!

*DISCLAIMER: The cycle above is our opinion on what Chris Dickerson could have used, this is for information and entertainment purposes only. There is no proof Chris Dickerson used steroids or any drugs. All information expressed is per 1st amendment rights.