Tom Platz is one of the most consistent bodybuilders of the 70's and 80's, routinely finishing in the top 10 at the Mr. Olympia from 1979 until 1987. He won the IFBB US World Qualifier in 1978, and finished 2nd at the IFBB World Pro. His top Mr. Olympia was in 1981 where he finished 3rd, barely being edged by Chris Dickerson and the winner Franco Columbu. 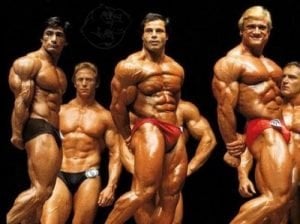 Platz was born in 1955, just 10 years after the end of WW2. At 9 years old Platz was inspired by a young Dave Draper, who was a popular 20-something bodybuilder. He saw a picture of Draper in a magazine on the beach and instantly was interested in achieving that physique. He set a goal at 10 years old that he wanted to one day be Mr. Universe after being amazed by Arnold's biceps in a poster.

Platz was fortunate that his father supported his son's goals, and invested in a small home gym in the basement of their home. When he did his first bench press, his younger brother counted out his reps and urged him on.

The setback for Platz was that he was not able to work out his legs because of a back problem he was born with having to do with plates. If he even tried squatting, doctors said it would aggravate the problem (with possible long term damage). Ironically, not training legs as a youngster and having this handicap did not stop Platz from achieving one of the most impressive legs in bodybuilding history.

First job and training legs for the first time

Platz moved from Oklahoma to Kansas City as a teenager. At only 15 years old, he convinced a health spa owner to give him a job as a personal trainer, based on his impressive physique. Platz was so excited about training and fitness that he drove in a lot of business from people who never even considered joining a gym.

It was during his late teens that he would start training his legs and ignoring the doctor's orders. He would pick the brains of guys who also had back problems and figured out he could still work his back and not only avoiding aggravating his back but actually make it stronger. After moving to Michigan he met some Olympic lifters who took him under their wing, and he was able to build monster legs.

Platz went from never training legs to considering squatting the most important lift. After moving to California in 1978, he would train at gyms and noticed that nobody would squat. At the time the belief was squatting made your waist and butt big, so nobody ever used the squat rack. Platz changed the gym culture by proving those were ridiculous bro-science myths. As a result, people started following his lead during the late 70's once they realized he was beating them badly in competitions thanks to his huge legs.

Platz ate a typical bodybuilder diet for that era:

Platz was a pioneer of training the mind over matter. An example was he would wear high socks when squatting because he felt like it would trick his mind into perceiving he was shorter than he really was when he would go down. He felt that this made him lift heavier weight.

His leg workouts were legendary. Attempt at your own risk! 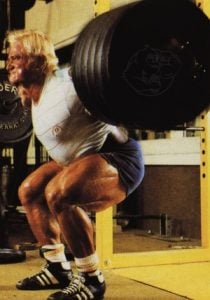 He would routinely squat 500+ pounds and his calf exercises would also be extremely heavy vs. his peers.

Platz is very knowledgeable about steroids. In fact, he interviewed bodybuilders in a long 5-hour video about steroid use asking them all about dosages and cycles. Here is part 1 of the fascinating videos:

In a very old video I dug up Platz was asked point blank if you need drugs to become a champion bodybuilder and Platz said "of course not, if drugs made a champion there would be a lot sitting right here." You can watch the interview here:

Even though Platz denied steroid use, we can speculate that he did use them. This is my version of the Tom Platz steroid cycle *:

Join the Evolutionary.org forums and have your say on Tom Platz! 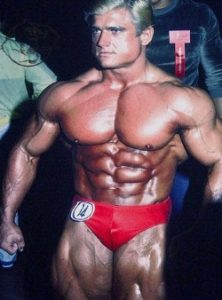 *DISCLAIMER: The cycle above is our opinion on what Tom Platz could have used, this is for information and entertainment purposes only. There is no proof Tom Platz used steroids or any drugs. All information expressed is per 1st amendment rights.