What is Creatine?
Creatine is nothing more than a nitrogenous organic acid produced from the amino acids glycine and arginine.  It occurs naturally in vertebrates, which makes it a non-essential nutrient.  The synthesis of creatine takes place primarily in the kidney and liver and is then transported to muscles via your blood.  Creatine works by first converting into creatine phosphate which helps to make ATP (Adenosine Triphosphate).  ATP is what provides energy for muscle contractions. 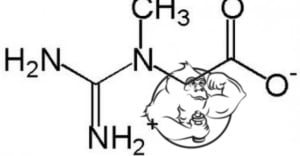 Creatine has been shown to significantly increase strength and endurance in workouts.  This is best demonstrated in exercises that require an “explosive” type of movement such as weight lifting, football, and sprinting.  In addition, creatine has been shown to decrease the time needed for muscle recovery.  This means you will be ready to perform quicker and better in your next training session.  For weight lifters, creatine supplementation best translates into increased reps during each set; furthermore, it has been shown to have anti catabolic properties.

An average person who eats meat will consume around 1 gram of creatine per day.  Muscles have a saturation point at which no more creatine can be used by the muscles.  This point is somewhere between 5 and 10 grams per day.  Contrary to popular belief, creatine does not require a “loading” phase and does not need to be cycled on and off.

Since creatine pulls water into the muscles, you will need to stay hydrated or there is a possibility of being slightly bloated.  However, this side effect is often overblown.  Assuming you  stay hydrated, there should be no side effects of creatine use.

The other problem with creatine is the supplement industry.  As we know, there are many products on the market such as pre-workout powders that have numerous ingredients.  Some of these products contain “proprietary blends” where they do not disclose the amounts of each ingredient but only a total weight of the blend.  Creatine supplements are no different.  Make sure to read labels and see what's in your tub.  Some will contain large amounts of sugars, caffeine, and even fillers.  This is why some people have adverse effects to creatine use.  Therefore, it is always best to take a pure creatine supplement without additives.

There are many quality products out there if you look.  A great one is Ancient Strength by N2BM.com.  It's a blend of creatine monohydrate at 4.551g, creatine HCL at 300mgs, and creatine pyruvate at 150mgs. 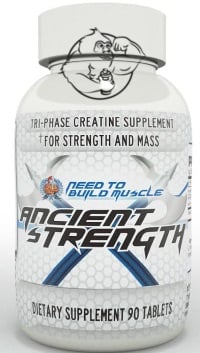 There are various types of creatine. Here are just a few of them explained:

Creatine is one of the most studied supplements out there.  It has been proven time and time again that it is a safe and effective product to take.  In bodybuilding, it is often a product that is used by a younger crowd that is looking for an edge but not something that will affect their hormone production such as steroids.

Creatine is a staple of any natural bodybuilder, and it's considered one of the most critical things to add to a proper diet and training routine.

Want to read about Creatine on our forums? check out these threads: