Danazol (Danocrine) is an oral derivative of ethisterone - a steroid progestin. It works by suppressing the production of gonadotrophins, while causing some mild androgenic effects.

In the 1970's, the FDA marketed Danazol in the US to treat diseases that cause tissue to grow inside the uterus of females. This problem is called Endometriosis, it's a serious condition because it can cause pain on or off their menstruation period, and it can also lead to infertility.

Danazol worked well for this purpose, but unfortunately, due to its androgenic nature it did cause such virilization issues as deepening voice, facial and body hair, and enlarged clitoris. As a result, it has since been overtaken by GnRH agonists, such as Zoladex or Lupron, which have far fewer side effects. 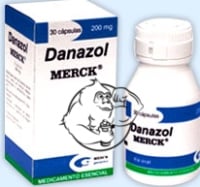 Danocrine prevents ovulation by suppressing the luteinizing hormone (LH) during the menstrual cycle of females. Interestingly, danazol is hypoestrogenic and hyperandrogenic, which will help relieve the symptoms of endometriosis disease.

It acts by inhibiting ovarian steroidgenesis, so less estradiol is secreted while boosting androgens in the body. Furthermore, danazol will also displace testosterone from SHBG (sex hormone binding globulin), leading to a boost in free testosterone levels. Additionally, there is evidence that it can help stimulate androgen and progesterone receptors; this can result in an elevated level of LH, without affecting the pituitary glands in men, hence not causing suppression.

Danazol use was plausible at one time for male bodybuilders because of its ability to block estrogen and boost LH. We could theorize that its use during cycle and post cycle therapy (PCT) could have been implemented at a time when SERM's and aromatase inhibitors were not yet available. SERM's did not work their way into the bodybuilding world until the late 80's, while AI's came even later. Therefore, back in the 70's and most of the 80's those who used anabolic steroids had to make use of what was available.

On cycle, it would have been used to help with estrogen related problems, such as gynecomastia (bitch tits) and other estrogenic problems, since certain anabolic steroids that were popular at the time (testosterone, deca durabolin, and dianabol) would aromatize very prominently. Then, off cycle danazol could have been used to help boost LH levels during their post cycle therapy (PCT).

Today, danazol would obviously be obsolete for this purpose, plus it is extremely expensive. Hence, it is recommended to use aromasin on cycle for estrogen control, and a SERM like nolvadex or clomid to help boost LH. Those drugs have far fewer side effects and are considerably less expensive.

As mentioned above, side effects in women are the virilization symptoms (body hair growth, clitoris enlargement, acne, and deepening of the voice) caused by danocrine's boost in androgenic activity. In both sexes this drug can cause liver issues, and mood changes as well. Weight gain is also possible.

Half life and legality

The half life is 3-6 hours, and in most developed countries this drug is only available by prescription.

This drug was rarely prescribed for longer than 6 months due to its risk of ovarian cancer when used for endometriosis in women, and the recommended dosage is dependent on a doctor.

Hypothetically, bodybuilders most likely ran it at an incredibly high dose of over 200 milligrams (mg) a day or more.

Thanks to the advancements we have in medicine, and discoveries of SERM's, athletes who use anabolic steroids have zero reason to need this drug these days.

Moreover, luckily females who suffer from medical problems now have access to several drugs that do not increase their risks for virilization due to androgenic activity.