Julian Smith is an Instagram fitness celebrity, who has also been featured on bodybuilding.com, and other social media outlets. Nicknamed as "The Quad Guy", Julian stands at 6' and 200 pounds ripped. He is 28 years old, and according to his bio, started serious bodybuilding at a very young age.

Julian is from Oregon, USA, and as a child was fascinated with the old school physiques of Tom Platz and Arnold Schwarzenegger. His first gym membership was at Powerhouse Gym when he was just a teenager. Being so young, and working out at a small gym with not much equipment to go around, he had to deal with the older guys bullying him off the benches. He made sure to respect the older veterans and wait in line for his turn, and that is where he learned how to be patient. 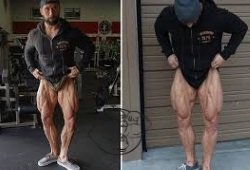 Julian admits his diet wasn't the best at first, but once he figured out how to properly diet and train together, his results started to explode. Unlike many of the other young guys, he would spend just as much time on his legs than upper body, which resulted in him earning the nickname I mentioned earlier "The Quad Guy". Julian went from the annoying teenager in his gym, to gaining the respect of the older guys and even being asked for advice.

Julian's gift for helping people has translated into a business for him. He has a website https://www.thequadguy.com/features where he charges a $6 monthly fee and a $60 yearly fee to tap into his workout routines. There is also access to his video library of instructional videos on how to train, nutrition basics, and vlogs. Finally, his website links you to where he has clothing and supplements for sale.

His Instagram page has over 900K followers: https://www.instagram.com/smith.julian/?hl=en . It is full of training videos and pictures of him showing off his physique.

Julian has youtube videos via bodybuilding.com which have received over 500K views. https://www.youtube.com/watch?v=EdBminB_AmU This video is an example of his leg day, featuring some very interesting leg workouts including sissy squats, which are rarely seen anywhere.

Another video I like is this one which focuses on triceps work:

Finally, he has an hour-long video up called smashing arm's:

Julian credits 3 core principles for why his legs are so impressive:

His arm workouts are quite painful. He will do 21 sets of 8-12 reps on arm day. His favorite arm exercises include:

Julian says the most common question people ask him is what exercises you have to do to get rid of stomach fat. Although not a dumb question, he says there is a lack of knowledge on this subject. He says the answer to this isn't what workout to do, but nutrition.

He believes in IIFYM (if it fits your macros), which means it is okay to eat non-bodybuilder type foods like burgers or donuts as long as they fit your daily intake of fat, calories, protein, and carbs. This type of flexible dieting is controversial, but here is a video of him explaining why he can eat whatever he wants and stays lean:

Although Julian did compete in a natural show, we have to remember he does sell training programs and supplements. So denying steroid use does have an economic advantage, because he would like people to believe he got that way via his secret programs and his magical supplements. It is almost assured that Julian has been using steroids since he was in his late teens and his current stack might look something like this.

Join the Evolutionary.org forums and have your say on Julian Smith Steroid Cycle! 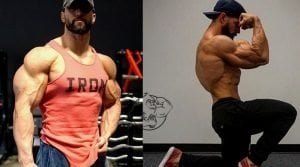 *DISCLAIMER: The cycle above is our opinion on what Julian Smith could have used, this is for information and entertainment purposes only. There is no direct evidence that Julian Smith used steroids or any other drugs. This article is our freedom of speech.