Who was Mike Matarazzo?
One of the most popular bodybuilders of the early 1990’s, Mike Matarazzo was a standout in many ways.  Blessed with ungodly genetics, Mike had a larger than life personality, which translated to audiences around the world.

Interestingly, Mike originally started bodybuilding in order to enhance his boxing prowess.  However, it didn’t take long for him to hang up the gloves on his aspirations in pugilism (bare knuckle boxing), and make bodybuilding his full time career.  As a result, Mike was all mass with no weak parts, topped off with 22 inch arms and 22 inch calves — cut.  Furthermore, his training style was all out — going as heavy as possible, and with lots of volume. 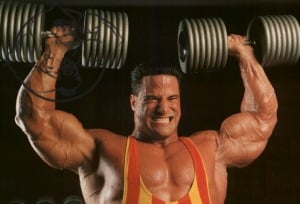 Mike Matarazzo’s professional career
Unlike many other bodybuilders, Matarazzo entered several contests a year and never took a layoff.  Therefore, he was always in top shape, which is one of the reasons he was featured in all the muscle magazines on a monthly basis, and he appeared on dozens of covers.  Yet, Mike never quite made it to the top of the competitive scene.  With Lee Haney dominating the Olympia, then followed by Dorian Yates, Mike fell a little short of grabbing the brass ring. 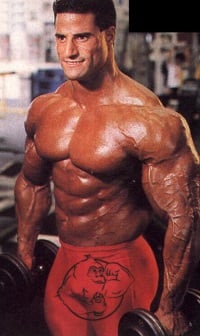 The death of Mike Matarazzo
Unfortunately, even if one has just 8% body fat, excess weight will strain the heart.  Consequently, when Mike was diagnosed with a heart condition in 1997, it was recommended that he lose weight.  Nonetheless, he declined such recommendations, and in between shows Mike weighed 275 pounds.  As a result, it finally all caught up with him, and on is birthday (November 8th) in 2007 he suffered a heart attack.  Mike blamed it on his lifestyle choices, and he was quoted as saying:

“I'd have to say that everything that led to my heart problem began the minute I started getting serious about competitive bodybuilding.  In order to get bigger, I'd eat five, six, seven pounds of red meat a day, no vegetables.  And I'd stay away from fruits because of their sugar.  Worst were the chemicals.  I have so many memories of being alone in a hotel room the week, five days or two days before a contest, and doing unspeakable things to my body — steroids, growth hormones, diuretics — anything and everything that we as bodybuilders do to achieve a certain look.  It has affected my whole life, so to all those guys who are on an eternal quest to get bigger and bigger and who are so vain about their never-say-die attitude, I say, "Change your attitude." Worry about keeping that body of yours as healthy as possible, because it's going to have to last you not just through your next contest or to the end of your bodybuilding contract, but for a long time. And a long time for a human being is nothing. It goes by real quick, even quicker when your health is gone and you have nothing to stand on.” - Mike Matarazzo

Mike talked openly about his steroid abuse and his HGH abuse, along with a myriad of diuretics he almost died using.  This is considered his average steroid cycle.

Why were these drugs used by him?