Provigil is the brand name for the drug modafinil. It is a prescription medicine used to improve wakefulness in adults who experience excessive sleepiness due to one of the following diagnosed sleep disorders:

It is used and abused by athletes and those in professions that require non stop alertness. The WADA placed the drug on the banned list in 2004. 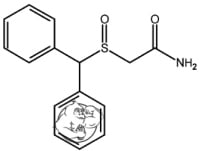 The drug modafinil was developed by Lafon Labs and originated with the late 1970's invention of a series of benzhydryl sulfinyl compounds. The brand name Provigil is marketed in the US by Cephalon Inc and was first prescribed in the late 90's.

There is widespread use of provigil in the military and law enforcement as an alternative to amphetamines. In fact, many countries such as France, UK and the USA have given the drug for fatigue management. Popular among pilots because of its long half life and effectiveness, studies have shown it will keep them awake for 40 hours and alert without sleep - at 600mgs given over 3 separate doses.

Astronauts who have long missions aboard the International Space Station are reported to use it as well.

Several high profile athletes were busted for modafinil in a wide variety of sports. Sprinter Kelli White, cyclist Dave Clinger, and former WNBA player Diana Taurasi all allegedly used it as a doping agent. The BALCO scandal exposed many more athletes and modafinil was a popular drug used. In fact, it's been widely published that Barry Bonds used it as part of a stack of drugs and PED's during his prime years in major league baseball.

How it benefits athletes

Provigil has been shown to prolong exercise time to exhaustion while performing at 85% of VO2max, and it reduces the perception of effort required to maintain this threshold.

Modafinil studies have shown it will reduce appetite and aid weight loss. Users decreased calories by up to 38% on a 400mgs/day dosage. Cephalon filed a US patent on its use as a weight loss drug in 2000.

Off label and other uses

Provigil has a variety of additional medical and off label uses including:

In the United States, provigil (modafinil) is a schedule IV controlled substance and is illegal to import without a prescription. Drug companies are forbidden to market the drug for off label uses. Cephalon pled guilty and was fined for falsely marketing provigil for non-FDA-approved practices. In Canada, it is a schedule F Rx drug, in Mexico and India it is not a controlled substance.

The FDA is not aware of any deaths due to overdose of modafinil. In the few cases of attempted suicide with the drug, the user experienced severe side effects related to anxiety and nausea. However, rat studies have suggested it is toxic at extremely high dosages.

Dosage for medical patients is typically 200mgs given once per day, with some patients going up to 400mgs in a single dose. Those with shift work disorder or who need to use it to get through their work day should take a dose 1 hour before work.

Athletes will take 200-400mgs in the morning for all day alertness for their training, but not everyday - rather only when they feel as though they need to stay extra alert and focused. Athletes who train at night may take it in the afternoon to stay awake.

Modafinil is addictive and should be used carefully and not abused. A NIAA study highlighted "the need for heightened awareness for potential abuse of and dependence on modafinil in vulnerable populations" due to the drug's effect on dopamine in the brain's reward center. It can be very addictive, and you should never over dose it.

The half life is fairly long for an oral drug, around 12-15 hours, so a single dose will remain in the system for quite a while, which is ideal for those who want to stay awake long periods of time.

Want to read about Modafinil on our forums? check out these threads: