First, if you watched the fight, you have to give Uriah Hall a ton of credit. He literally had a broken toe with a bone sticking out of it and kept going and fighting. Amazing right? The guys has heart and soul. I was never a fan of Hall but this one act made me someone who supports him.

Here is the picture of Uriah Hall's broken toe – see the bone is sticking out!

Here is a picture of him after the fight being taken to the Hospital: 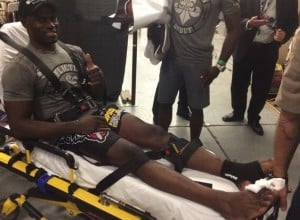 The fight: Santos had a great game plan, he kept coming in with low-kicks. This slowed down Hall and might have even broken his toe. The whole 3 rounds, we saw a lot of low kicking by Thiago Santos, but not much else. It was really a fight dominated by the stand up of Uriah Hall. We saw 3 rounds of stand up boxing with some kicks from Uriah, with the ending (3rd round) being an attempted takedown by Santos. Overall, it was a fight that was well suited for Uriah and he did well. His heart really showed.

This is probably the shortest post-fight I've done! Although, in the past, I found Ronda Rousey's attitude repulsive, she showed real talent today. She completely dominated Alexis Davis. She came in with a right and left, Alexis bent down, got a knee from Rousey and was hip tossed – trademark Rousey Judo. Once Ronda fell on top of Alexis, she started ground and pound from the side guard and KOed Davis in 16 seconds. Great fight for Ronda Rousey, she's a real dominant champion in women's MMA.

Going into this fight, I publicly predicted and bet with friends that Weidman was going to push for a full 5 round grinder, and that's what happened.

Chris Weidman had a great game plan. For the first 3 rounds, he closed the distance and cut off the octagon for Machida. He pushed forward and negated Machida's game plan of dancing around. The first 3 rounds went clearly to Weidman. In the 4th round, Chris gassed out and Machida, knowing he's desperate and lost 3 rounds, started to get very aggressive. Lyoto Machida pushed forward, attacked Weidman and caught him many times, left hand, right hand, kicks, it was all Machida. In the 5th round, Machida knew he had to do something extraordinary, but Weidman got a second wind and came in with some power. He took down Machida and really controlled the round well. In the last 10 seconds, Machida was on his feet and tried to KO Chris, but no luck. Weidman just took it and kept coming. The judges scored the fight: (49-45, 48-47, 49-46). I would say the most valid score is 49-46. I give Weidman 4 rounds at 10-9 in his favor (1,2,3,5) and the 4th round a 10-9 in Machida's favor. Overall, it was one of the best title fights I've seen in a long time, so thumbs up to Weidman for defending his title and validating his reign as a champion. 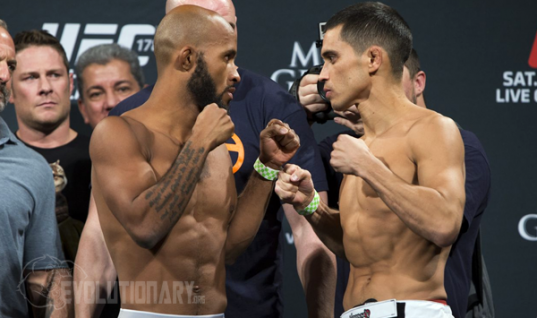