It is no secret that athletes of all walks of life and of all competitive sports use performance enhancing compounds to give them an edge over their competition. Anyone who has any logic knows that almost every athlete is going to do what it takes to even the playing field, and if your opponent is getting an advantage, it is only fair you level that advantage yourself - right?

In this article, we will examine all aspects of this subject pertaining to UFC, and try to separate the myths from the facts. 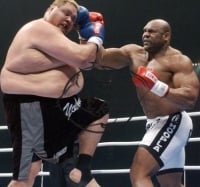 UFC stands for the Ultimate Fighting Championship, and it is the largest mixed martial arts (MMA) promotion company in the world. Every MMA fighter dreams of competing one day in this organization because it has the best fighters, pays out the most money, and opens the fighter up for the richest endorsements.

The UFC has 9 weight divisions (from 115 pounds up to 265 heavyweight), and the rules follow the "United rules of MMA." This organization was founded in 1993 and it is headquartered in Las Vegas.

There are different fighting disciplines that can be seen when you watch a UFC fight, many of which include boxing, karate, judo, Muay Thai, Sambo, wrestling and Brazilian jiu-jitsu. Therefore, the sport has grown tremendously over the years, and many gyms around the world host MMA classes and competitions.

Rules in UFC can be complex but a rough summary is as follows:

Matches can end when a fighter taps out, is knocked out, or a referee/doctor/corner decides to stop the fight. A fighter can also be disqualified for an illegal move, forfeit due to ending bout for non injury reasons, or no contest where there was an unintentional illegal move. If a match ends, three judges score each round, to decide the winner.

The media and politicians have salivated over anabolic steroid use over the past decades, and many sports organizations want to look the other way, but also do not want to be scrutinized and have their image disgraced. Hence, for these reasons there are testing protocols and rules in place, so that at least an appearance is given of the organizations trying to curb anabolic steroid use.

Therefore, there have been reforms in the UFC over the years, and in 2014 the Nevada State Athletic Commission banned the use of TRT (testosterone replacement therapy), which led to the UFC banning TRT use worldwide for its athletes. As a result, athletes will not be able to use even doctor prescribed testosterone.

However, there has been a spat of failed steroid and drug tests recently, so the organization decided to have stricter rules starting in July of 2015. All of the 585 current UFC fighters will be subject to random and multiple PED (performance enhancing drugs) testing. Moreover, stricter penalties and suspensions of possibly 2 to 4 years will be applied, and those who repeatedly test positive can be banned for life. There is also a chance of getting their titles stripped. To make sure this works smoothly, fighters are required to notify the 3rd party testers, that is - USADA, of their whereabouts at all times, and missing 3 tests is considered a fail in itself.

According to former UFC champion Renzo Gracie "almost every MMA fighter is on steroids because the fact of the matter is, you can't compete at such a high level without them."

Nevertheless, it isn't just anabolic steroids that are used. Fighters will also use estrogen blockers, diuretics, EPO, and HGH as well. At the moment, the leading anabolic steroids that fighters tested positive on are winstrol and masteron. However, these two are not the only steroids used by UFC athletes, as there have been cases of them testing positive for nandrolone, testosterone, trenbolone and oral designer steroids (such as superdrol).

Benefits of Steroid use

It should be no secret that fighters want to make their weight class, and it is a specific science where you want to weigh as much as possible, while still squeaking into the lower weight class in order to give you a weight advantage over your opponent. Logically, this is why masteron and winstrol are used, as they will help inhibit estrogen and lower water retention, while providing DHT (dihydrotestosterone sex hormone) and increased aggression. Furthermore, estrogen blockers and diuretics will also help the athlete make it into the weight class, and for this reason they are commonly used. Nonetheless, diuretics can dehydrate and weaken the fighter too much.

EPO is used to help with endurance, since a fighter wants to outlast their opponent. HGH will help with recovery and injuries. Oral designer steroids do not have long detectable times, so they may feel this is something they can get away with.

There has also been numerous fighters caught with elevated levels of testosterone. The ratio of T/E (testosterone vs. Epitestosterone ratio) is allowed to be 6:1. Anything above that is a fail. Testosterone is male hormone that can give a fighter an edge with strength and aggression.
I can also guess that many fighters take cheque drops and non-esterified hormones, which can be taken directly before the fight, but are nearly impossible to be detected.

UFC commentator Joe Rogan estimates that more than half of fighters are currently taking anabolic steroids. Interestingly, if we compare that to what Renzo Gracie has mentioned earlier in the article, his estimate might be very low.

Recently, one of the greatest fighters of all time Anderson Silva was busted for Masteron and androsterone use. His reasoning was to help recover from a leg injury, but we know that wasn't the real reason.

In late 2014 fighters Keith Berry, Nick Moghaddam, and Robert Drysdale were all busted for elevated testosterone, and it wasn't Drysdale's first fail either.

Piotr Hallman, Brian Ortega, Kevin Casey, and Herman Tarrado all were busted for Masteron use in 2014. Casey claimed that he just wanted to merely cut down weight.

Notable female fails include such athletes as Cristiane Santos, who was busted for winstrol. As a penalty she was fined and had her license suspended. She admitted using winstrol to help her make weight.

Overall, there have been 5 busts in 2014 (not counting elevated testosterone), and every prior year there has been at least one bust. The big year was 2007, with a record number of 14 drug fails. Ironically, most fighters who tested positive after the fighter lost the fight! This can either mean that steroids don't help you on fight day, or more likely, that their opponents were smart and lucky enough to not get caught.