Before getting banned in 2004, prohormones in general have been used for decades in the bodybuilding community. In fact, prior to the ban these compounds were viewed as an effective and legal alternative to anabolic steroids, and 4-Androstenediol (4-AD) was one of them, with the 1999 patent on “Use of 4-Androstenediol to increase testosterone levels in humans” is still held by Patrick Arnold. 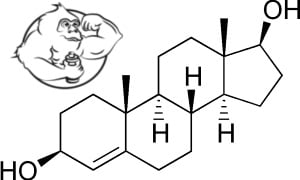 Chemically, 4-AD is closer to testosterone than androstenediol (1-AD), and it acts as a weak potential agonist of the androgen receptor. On its own, 4-Androstenediol does not have a prominent androgen receptor binding affinity, but as a prohormone it converts to testosterone via the enzyme 3-beta hydroxysteroid dehydrogenase (3bHSD). Interestingly, although its bioavailability is fairly poor, it is still better than that of 1-AD (1-Androstenedione). Furthermore, just like in the case of 1-AD its half-life is also relatively short. This means that large and frequent doses will be required to see the anabolic effect from 4-AD. Due to the fact that 4-AD is usually referred to as a “wet” compound, it is used more often in bulking cycles, rather than the cutting ones. 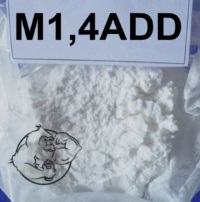 4-AD has moderate estrogenic and androgenic side effects, as it converts to testosterone, and testosterone can convert to both DHT and estrogen. Additionally, 4-AD on its own can also convert to an androgen called androstenediol. Consequently, at the high doses required to get the desired effects from this compound, certain side effects can become a concern. Some of these include gynecomastia, hair loss, and acne. Nonetheless, the estrogenic side effects of 4-AD are easy to control with the use of an aromatase inhibitor (AI), such as aromasin or arimidex. Since 4-AD is not methylated, there is no risk of stress on the liver.

An average dose for a standalone 4-AD cycle would be 1000 milligrams (mg) or more, divided into 3 separate doses. Thanks to the short half-life, users report an immediate boost in aggression and strength. Because of this, it is a great idea to plan one of your doses just before training. In order to increase its absorption rate it is recommended to take 4-AD with a meal containing fat, since it is non-methylated and has a poor bioavailability.

Interestingly, before the ban on prohormones. a PCT for 4-AD would consist of 6-OXO only. However, we know today that this would not be enough. Therefore, a proper PCT for a cycle of 4-AD would be a typical “mini-PCT” that would look something like this:

This PCT protocol would give you the best chance at recovery and keeping the gains made while on cycle.

Overall, 4-AD was a great product that produced results. However, now that this class of compounds is banned, a great alternative would be SARMS – selective androgen receptor modulators. Therefore, if you are interested in legal alternatives to steroids, please research SARMS, and ask any questions on the evolutionary.org forums. A great beginner SARMS cycle would be the Triple Stack:

After the cycle, run a 4 week mini-PCT:

4-AD was probably one of the most popular prohormones used before the ban of 2004, even though it is a rather wet compound because of its water retention. Hence, as mentioned above, it would most likely be used in a bulking cycle over a cutting cycle. Sadly, this compound is not available any more, and the closest alternative are the SARMS, which truly deserve a good portion of attention.