The Russian weightlifting record holder and world champion Alexey Lovchev has been temporarily suspended by the International Weightlifting Federation (IWF) for using Ipamorelin during the last world championship, which took place in Houston in the end of November. At the moment, only the sample “A” has been used for testing, and in order to approve the suspension the IWF will have to test the “B” sample too.

The 26 years old Alexey Lovchev is a professional weightlifter from Russia, and he competes in the heavyweight class (105 kg +). Lovchev is an exceptional athlete, and in spite of his very short career, he has already won multiple titles. In fact, his worst results were third places on the national championship in Russia and World championship in 2013. Since then, Lovchev has been dominating the scene, as he became the national Champion of Russia twice (2014 and 2015), European champion (2014), and World Champion in 2015. What's more, during this last world championship Alexey Lovchev broke two world records on his way to the world champion title. 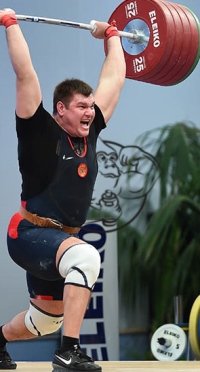 What did he use

Alexey Lovchev has been accused of using Ipamorelin because traces of this compound have been found in his blood sample “A”. Ipamorelin is a GHRP – growth hormone releasing peptide, so it appears that Alexey Lovchev was benefiting from increased growth hormone levels. These benefits would include an increased lean body mass, lower fat levels, faster recovery, and an improved sleep.

Interestingly, Ipamorelin is considered to be the mildest GHRP in terms of side effects, as it comes with the least amount of possible undesired effects. Additionally, Ipamorelin has the advantage of not shutting down the natural GH production in the body, even when really high dosages are used, which is ideal for athletes. Furthermore, it does not affect cortisol and prolactin production, so there are no side effects associated with these hormones. All in all, it is a very powerful growth hormone releasing peptide, which will give a very slow and steady growth in lean mass with very few side effects.

However, Alexey Lovchev has denied using Ipamorelin, and he claimed that he was only using drugs approved by the IWF for the treatment of his meniscus injury. “I am aiming at the Olympic Games, so I strictly follow all of the doping regulations, because I don't want to risk it. At the moment we have sent all the supplements and medicines I have been using to the IWF for testing, and I will insist on the testing of sample B,” Alexey Lovchev said in an interview.

There are rumors at this point that Lovchev was lucky he didn't get caught using steroids.  It seems he was smart enough to clear the steroids out of his system, but he didn't time his peptide clearing correctly and was caught.

Why is this so important

In spite of the fact that Alexey Lovchev was by far not the only one who tested positive on PED use, and there was a total of 24 athletes who are suspected for doping, his suspension comes amidst the huge scandal that has been developing around the Russian athletics recently.

As a reminder, in November, the world anti-doping agency (WADA), has requested the disqualification of the entire Russian athletics team from the next Olympic Games due to systematic doping violations, and the involvement of the RUSADA (Russian anti-doping agency) in corruption schemes.

Therefore, while further investigation is proceeding, the Russian officials and Alexey Lovchenko himself claim that it is a political case, and that he has passed all the necessary tests a week before departing for the World Championship held in the US.