....Inflammation and Joint Health explained....facts about your joints exposed.....

Inflammation is the body's natural response to harm and is a vital part of the body's immune response. It allows the body to heal itself after an injury, defend itself against viruses and bacteria, and repair damaged tissue. There are two types inflammation: acute and chronic.

Acute inflammation occurs when you bang your knee, cut your finger or get a sore throat. Your immune system dispatches an army of white blood cells to surround and protect the area, creating visible redness and swelling. Acute inflammation is generally perceived as "good," because it is the body’s attempt to heal itself after an injury.

Inflammatory joint pain is characterized by morning stiffness or stiffness that worsens with long periods of inactivity, and pain that is improved with movement or anti-inflammatory drugs. 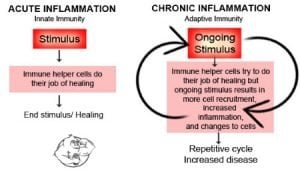 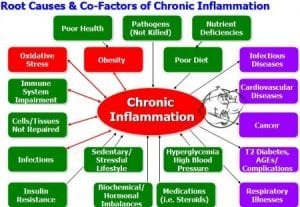 Foods That Cause Inflammation 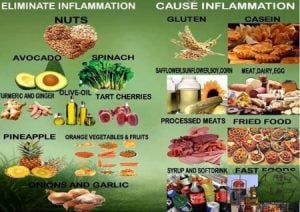 What About Anti-inflammatory Drugs?

Non-steroidal anti-inflammatory drugs (NSAIDS) such as aspirin, naproxen (Aleve) and ibuprofen (Advil and Motrin) work by blocking the enzyme cyclooxygenase. This keeps the body from making a molecule called prostaglandin, which generates inflammation. 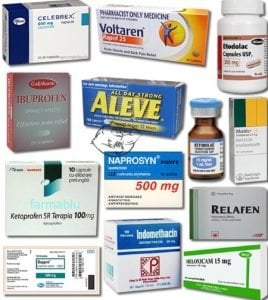 While NSAIDs may seem like the best option, they promote gastrointestinal bleeding which can lead to ulcerations. One study out of Holland found that taking aspirin on a regular basis increases the incidence of micro-bleeding in the brain—which can lead to micro-strokes. Furthermore, Aspirin has been associated with the development of the disease Reye’s syndrome in children. NSAIDs are also liver toxic which can lead to toxic hepatitis.

Fortunately, there are a lot of very effective natural anti-inflammatory supplements that will reduce inflammation without side effects.

Join the Evolutionary.org forums and have your say on inflammation! Read more about Inflammation and joints on our forums: