Matt Porter is an American bodybuilder, fitness coach, and online fitness guru. He is most known for his 2010 Mr. Oregon win and his stats at his peak were 5'9" and 245 pounds.

Porter started lifting weights in high school and he quickly became obsessed with the fitness lifestyle. As an adult, after winning Mr. Oregon he would also win the Oregon Ironman Championships and get 2nd at the IFBB Men's Heavyweight North American Championships. 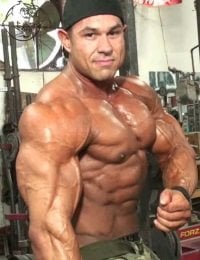 Porter has started growing his social media recently and updates them a few times a week. His Instagram page has 50K followers https://www.instagram.com/mattporterapproved/?hl=en and has pictures and videos all things fitness related. His youtube channel is similar https://www.youtube.com/user/mattporterapproved/videos with content. His most popular videos include "How to get big in a hurry using slin/aas,GH/food":

Porter has a website where he sells supplements (mpasupps.com). I must admit when I first looked at these, it was obvious he wants to be as unique as possible. He features fancily named supplement topical gel fat burners called vasoburn and vasodry, pre workout and post workout products called celluvol and creribovol, support supplements called heartsolve and cardiosolve, and even a supplement he claims will help with cortisol called cortisolve. In the end, all of these products are quite overpriced and contain the same ingredients you can find from any vitamin shop. In addition, his site sells apparel (shirts, hoodies etc). 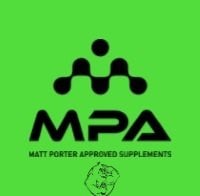 During his last prep, Porter said he works out twice a day. He will split up muscle groups, meaning he will do quads in the morning then hamstrings in the evening. He likes German style training with 10 sets of 10 per exercise.

For cardio, he likes to train on carb depleted days to burn off fat and likes to do high-intensity style since it does the job in a shorter time frame.

As far as his training beliefs, he says that people new to training should stick to compound lifting their first few years. 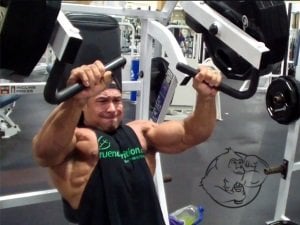 For experienced lifters, including himself, he believes the body is constantly adapting, so you have to keep changing up your workouts every 6 weeks or so. The one training constant he follows is: he will train with heavyweights in the offseason, and ahead of a show will do lighter weight with more intensity, taking little rest in between. His reasoning for not lifting heavy during that timeframe is it will help prevent an injury right before his show.

Because Porter openly uses insulin, he is better able to efficiently use the large amounts of food he is consuming. For this reason, he says to get truly huge you need to eat every 2 hours and he has 6-8 meals a day. 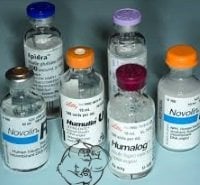 His blueprint is 2 zero carb depletion days, followed by a carb loading day with rice, cereal or eat at an Italian restaurant.

He also uses a whey protein isolate with truvia.

Variables include a whey isolate yogurt, which is low in carbs and 97% fat-free hot dogs. He is very heavy on spices and sugar-free condiments to season food as he wants to retain water until he is show ready.

Break from steroid use

Porter said that after his father passed away from Prostate cancer 2 years ago, he decided to take a break from steroids. He stopped everything cold turkey and started fasting 18-20 hours a day to cleanse out his body. He said it felt good not having to worry about always hitting his macro's, and he ended up dropping 30 pounds and feeling much healthier.

Porter is open about his prior PED (steroid) use in his videos. He does warn steroid, HGH, and insulin abuse will become addicting psychologically. He freely admits to using steroids and PEDs, and based on his contest prep videos, we can speculate his cycle looked like this ahead of a show:

Join the Evolutionary.org forums and have your say on Matt Porter Steroid Cycle!

*DISCLAIMER: The cycle above is our opinion on what Matt Porter could have used, this is for information and entertainment purposes only. There is no direct evidence that Matt Porter used steroids or any other drugs. This article is our freedom of speech.