Zac Efron is a 30-year-old Hollywood actor, singer, and fitness buff from California. He is most known in the fitness community for achieving a ripped physique ahead of his supporting role with "The Rock" Dwayne Johnson in the very cheesy movie Baywatch. You can watch a scene from that movie here: 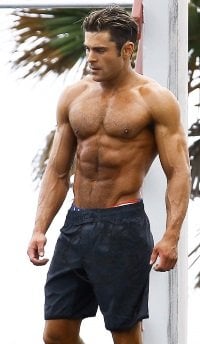 Zac says he grew up more of a bookworm and wasn't considered one of the cool kids. He was his biggest critic and would get angry at himself if he didn't get an A on a test in school; as a result, he had a lot of motivation to be great at everything he did. From a fitness standpoint, he was actually quite skinny and had little interest in it. Instead, he showed early talents for both singing and acting from an early age, and was interested in musical theater and dressing outlandish. In high school, his drama teacher saw his talents and pushed him to get an agent and pursue a career in Hollywood. 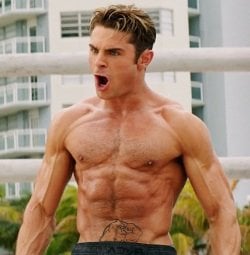 At first, Zac focused on acting in small roles for popular shows like ER, Firefly and The Guardian. He would also do movie roles for Lifetime and other small budget movies before being noticed in a teen musical called 'High School Musical' and the movie 'Hairspray.' Disney aired his musical in 2007, and this gained him a lot of young fans and notoriety. He would go on to star in several shows and movies in the early 2010's like 'The Paperboy' "Me and Orson Welles' and 'Parkland'.

During this time Zac had to fight off temptations in Hollywood from the alcohol and drug scene. He managed to beat back his addictions and says he got clean in 2013.

Baywatch was made famous for 11 seasons starring Pamela Anderson and David Hasselhoff, as a show about lifeguards who protect the beach. In 2017, Zac was lucky enough to be cast alongside the mega-popular Dwayne Johnson (The Rock) in the movie 'Baywatch' based on that popular show. 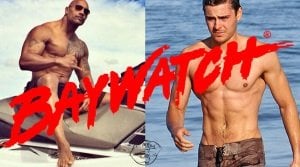 The Baywatch movie had a budget of $70 million. Although it did not do particularly well at the box office, and it was panned across the board as an awful movie (rating only an 18% at rotten tomatoes by critics), it still managed to attract the younger crowd and further boosted Zac's popularity. In fact, Zac won the Teen Choice Awards for best actor in a comedy, while getting a Razzie nomination for worst actor. That shows the gap between his popularity from kids to adults. If Zac hopes to be ever known as a legitimate actor outside the teeny community, he will need to focus on landing roles that display his real talents in the future.

Zac wanted to look his absolute best, as his role in Baywatch could make or break his career, and it was an opportunity he could not squander. He hired a coach and trained his ass off for the role.

His workouts consisted of a 3-day split:

He also trained his abs every day to keep them rock hard.

His workout philosophy was supersetting, meaning he would train an exercise back to back with no rest in between, achieving a strong burn and pump, while burning calories. An example would be doing flat bench for 15 reps, 5-second rest, then 15 reps on the incline, and so on throughout the whole workout. Rest periods between sets were kept between 5 and 60 seconds at the most. This way the same muscle groups get worked out hard during that workout.

When not weight training, Zac worked on sprinting and agility. He enjoyed doing some forms of gymnastics on monkey bars for agility and yoga to increase flexibility.

Zac's diet was very strict. He had no sugar, dairy, or processed foods. He stuck to 100% organic whole foods only. His diet overall was balanced and consisted of:

3. Fruit: berries and watery fruits like apples and melon

4. Nuts/seeds: for fats he had walnuts and seeds

5. Whole gains: his favorite was quinoa and he would have some brown rice

He also took a vegan protein powder that was unflavored with no added ingredients.

Standing next to Dwayne Johnson in pictures, it was obvious Zac has a long way to go to get as big, but that isn't really his goal. Women and yes men, go absolutely bonkers over his physique, so to achieve that it takes a lot of dedication. It was obvious though that Zac did get help from PED's and we can speculate he used the following ahead of his Baywatch role (our version of the Zac Efron Steroid cycle): * 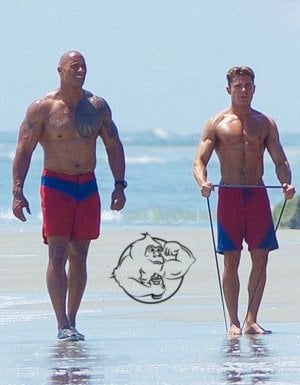 Join the Evolutionary.org forums and have your say on Zac Efron Steroid Cycle!

*DISCLAIMER: The cycle above is our opinion on what Zac Efron could have used, this is for information and entertainment purposes only. There is no direct evidence that Zac Efron used steroids or any other drugs. This article is our freedom of speech.