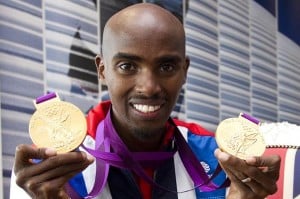 Mohamed "Mo" Farah, the Somali-born British international track and field athlete in the long distance and middle-distance, is left stunned after the BBC investigated "ridiculous" allegations centered on his trainer Alberto Salazar.

The double gold medalist was surprised to find the BBC commissioned a probe into false claims that he is a cheat and had taken performance enhancing drugs. The probe centered on claims about Alberto Salazar, the trainer of Farah, was quietly shelved after a period of nine months. According to a BBC insider, nothing could be found despite nine months of digging to support any allegations against Mo or Salazar and the project was aborted.

Mo Farah remarked this hurts and he is probably the most tested athlete in the world. He further remarked he has to give up a one-hour slot every day, no matter where he is and he hopes other nations had the same system. Mo Farah also added that we need to get on top of this ­problem and apply the same rules worldwide. He also said Alberto is a great coach and for all his blood tests he works with Barry Fudge, the top physiologist at UK Athletics. The current 10,000 meters Olympic and World champion and 5000 meters Olympic, World, and European champion puts his success to a training regime that means lengthy periods away from his wife, step-daughter, and one-year-old twin girls. The decorated athlete also said he didn't achieve success overnight and his success has been the product of struggle for many years.

Ricky Simms, the agent of Farah, said it is ridiculous to suggest there’d be a documentary and there’s nothing to have one about. Farah's trainer Salazar remarked we know we are clean at this level and we know we’re never ­going to test positive for anything. Salazar added everybody believes if anybody runs well they have to be on drugs and that is their excuse for why they don’t run well.

In 1997, runner Mary Decker Slaney, coached by Salazar, was banned after testing positive for testosterone in 5,000m trials for the Atlanta Olympics. Slaney claimed taking the birth control pill could have caused a false positive result.

Farah was recently beaten by Kenenisa Bekele of Ethiopia in Great North Run thriller. The 30-year-old Farah chased down the Ethiopian runner in the last 400m in a great finale but was pipped to the line by one second. Former world marathon champion and BBC Sport expert Paula Radcliffe said this defeat is going to give Mo fire as he heads into his winter training because he doesn't like to lose. Radcliffe added Farah needs to learn to study the course beforehand because she doesn't think he realized how narrow the home straight was and he needs to learn to relax when running downhill because the race was won on that downhill section.