UCI President Brian Cookson has expressed surprise in the call of David Lappartient for corticosteroids and Tramadol to be completely banned as he prepares to battle his French rival for the UCI Presidency. 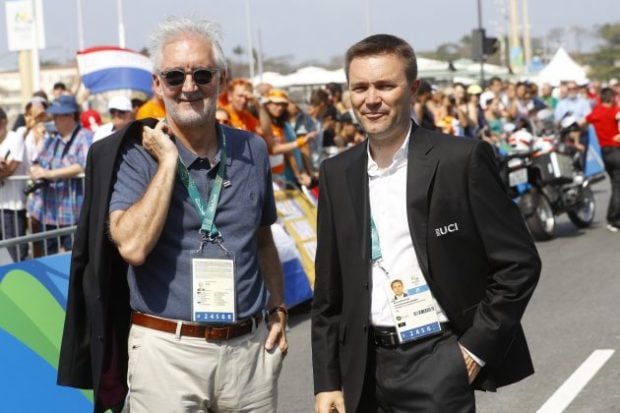 Cookson is seeking a second term as President of the world governing body of cycling. The election is due to be held on September 21 in the Norwegian city.

Lappartient, the European Cycling Union President and the rival of Cookson, has called for the substances to be banned in a letter to the Movement for Credible Cycling (MPCC). Lappartient wrote to MPCC President Roger Legeay that corticosteroids must be banned from competition and these substances should therefore fall under anti-doping rules.

The European Cycling Union President also commented a rider must be put on sick leave like any other ill person and must not take part in competitions until his or her cortisol level is back to normal if he or she needs cortisone treatment for an illness. Lappartient added he thinks the world governing body of cycling could have been more keen on applying this rule that is not the most difficult to implement. Lappartient also added that Tramadol must also be banned in cycling and further commented that we must continue to push for the World Anti-Doping Agency to include Tramadol and corticosteroids on the list of illegal products.

In reply, Cookson said the UCI had already made efforts in the past to get Tramadol added to the banned list of WADA as the painkiller had been previously blamed for crashes in the peloton.

The use of corticosteroids is generally made to treat a wide range of ailments but Therapeutic Use Exemptions (TUE) must be sought to ride. However, the TUE use of corticosteroids has been the subject of controversy as many claim riders experiencing performance-enhancing benefits have exploited the TUE system.

The UCI President remarked UCI would have to work with WADA on the issue and claimed the relationship between WADA and UCI was "unrecognizable" from four-years ago, when they were perceived to be in conflict. Cookson remarked David Lappartient should be well aware, first of all, that corticosteroids are already banned in competition, and that the UCI and Cycling Anti-Doping Foundation are already working closely with WADA on issues of detection. Cookson added he also knows full well that we have made the case to WADA to add Tramadol to the banned list and this is an ongoing process.

Cookson also added any attempt to add substances to the banned list without WADA agreement would be challenged by the first person to be charged, and would fall at the first hurdle. Cookson said he wrote a letter in reply to MPCC President Roger Legeay in response to the same questions that we all want the same things but it is essential to work with WADA on these important matters. Cookson also commented that the world governing body of cycling has led the way in response to tackling doping, and establishing fully independent arrangements through CADF, legal anti-doping services and our tribunal and we are proud of the strength of the relationship we now have with the World Anti-Doping Agency.