Joseph "Joe" Weider was one of the most vital figures in bodybuilding history. Described by Arnold Schwarzenegger as the 'godfather of fitness', Joe would transform bodybuilding by modernizing it through his entrepreneurial ideas. He was a Jewish Canadian, and his stats were 5'10" 180 pounds. He was nicknamed "The Master Blaster". 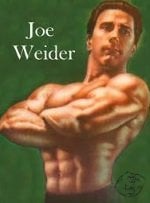 Joe was born in 1919, the son of Polish-Jewish parents. He was raised in Montreal, Canada and had 3 siblings. As a poor child, he was forced to drop out of school very early to support his family and was bullied by the neighborhood kids due to his tiny frame. Joe would start lifting out of the family garage using car parts and tires.

Although he didn't have the genetics for bodybuilding, he loved it tremendously and would write about it extensively. Joe ended up publishing a magazine, writing out workout programs, and helping his brother start a sports nutrition company. Bodybuilding during the early 40's was simply not popular, but Joe believed he could grow this hobby/sport into something huge. 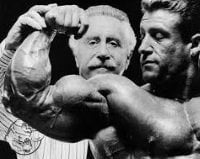 Joe and his brother Ben would start their own bodybuilding federation, debuting Mr. Canada, grow their fitness magazines, and train people.

In 1965, Joe and his brother would start the Mr. Olympia bodybuilding contest, which was going to directly compete with NABBA Mr. Universe. Joe had Hollywood connections due to his Jewish heritage, and his media network, so he was able to get a little-known bodybuilder named Arnold Schwarzenegger a role in the movie 'Hercules in New York'. Joe was hoping to get more recognition for his Mr. Olympia contests, which were not very popular yet. In 1969, Arnold Schwarzenegger repaid him by competing at Mr. Olympia, finishing 2nd place to Sergio Oliva. 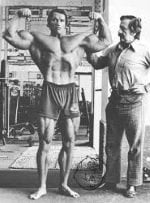 From there, Arnold Schwarzenegger would popularize bodybuilding like never before, winning every contest until 1975, and would make Mr. Olympia the biggest bodybuilding competition. Today, every top bodybuilder's goal is to win Mr. Olympia!

Joe and his brother had to fight the government several times over their products claims and ingredients. The Federal Trade Commission (FTC) came down especially hard on their company during the 70's and 80's, and they had to scale back on their operation. Nevertheless, Joe would make a fortune pushing supplements like whey protein, herbs, and amino acids.

Joe and his brother would write a book called "The Weider System of Bodybuilding" which was marketed heavily in their magazines. In 2003, he sold the magazines for over $300 million. This ended up being a brilliant move as the magazine industry has cratered over the past 15 years.

Arnold Schwarzenegger credits his career to Joe Weider because he was the one who introduced him to the bodybuilding world, convincing him to come to the USA to chase his dreams. If not for Joe Weider, the IFBB and Mr. Olympia would not have existed. In addition, those magazines many of us read growing up would not have existed, and bodybuilding, as we know it today, would not exist. He was truly the Godfather of Bodybuilding.

Joe lived a very long life dying at 92 years old of heart failure. He stayed in very good shape even in his later years. You can watch an interview he did at 90 years old here talking about his life:

Many pros and even movie stars adopted Joe's training protocols and mixed them with their workouts. In fact, here is a video of Lou Ferrigno following a Weider workout:

There are 5 training principles he preached:

You can watch the complete Joe Weider Bodybuilding Training System on YouTube here:

Joe's principles are quite interesting, and you might hear guys in the gym parrot them to you because they heard them somewhere themselves, not being aware it was Joe Weider who came up with them. I do not necessarily agree with everything Joe believed in. Nevertheless, the advice he brings forth can be considered a good basic understanding of nutrition. 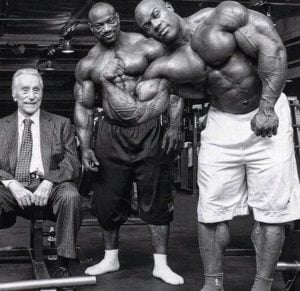 Joe was able to workout even as a senior, staying in great shape for his age. This was what his senior steroid stack looked like:

Join the Evolutionary.org forums and have your say on Joe Weider Steroid Cycle!

*DISCLAIMER: The cycle above is our opinion on what Joe Weider could have used, this is for information and entertainment purposes only. There is no direct evidence that Joe Weider used steroids or any other drugs. This article is our freedom of speech.