Halodrol (4-chloro-17a-methyl-androst-1,4-diene-3b,17b-diol) is a compound originally sold as a nutritional supplement before the major ban of prohormones in 2014.  It is alleged that Halodrol was first developed by Bay Area Laboratory Cooperative (BALCO) to provide professional athletes with a performance-enhancing drug that could not be detected by standard tests.  The original manufacturer however was Gaspari Nutrition, a company founded by International Federation of Body Building (IFBB) and Fitness Hall of Fame bodybuilder Rich Gaspari.  It was first released in 2006.

Some people will consider it an oral steroid while others consider it a prohormone.  This is because it is very similar to the oral steroid Turinabol (4-Chlorodehydromethyltestosterone).  In reality, Halodrol is a 17aa steroid that is derived from testosterone.  One of the issues was that this product contained Madol (desoxymethyltestosterone) which is known as one of the very first “designer steroids”.  The FDA was quick to clamp down on this once it hit the mainstream media and subsequently Gaspri removed it from their portfolio. 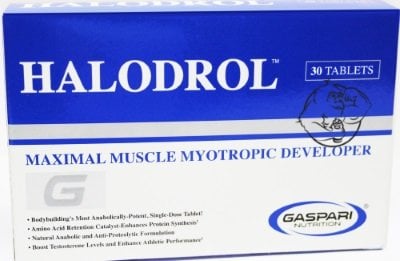 The chemical makeup of Halodrol is 4-chloro-17a-methyl-androst-1,4-diene-3b,17b-diol.  There is a structural modification (17a-methyl) that allows the compound to survive the first pass through the liver.  This is what makes it extremely orally bioavailable but also liver toxic.  Note, Halodrol is a testosterone derivative.

A typical dose for Halodrol would range from 50mg per day to 75mg per day for 4-6 weeks, depending on experience and goals.  There are some people, however, that have gone up to 125mg per day, but that is not recommended unless you are a high level athlete and under the supervision of a doctor.  Halodrol is a powerful dry compound but is liver toxic.  Due to this it is not recommended to run a cycle for more than 6 weeks. 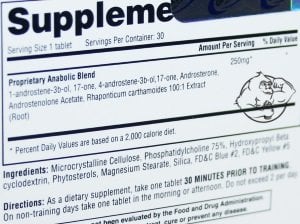 A typical Halodrol cycle is best stacked with SARMS.  If you're cutting with Halodrol, stack it with cardarine (GW) and ostabolic (mk2866).

Many prohormone users will start off by using the compound Epistane (2a,3a-epithio-17a-methyl-5a-androstan-17b-ol).  Epistane is said to be a good first cycle prohormone to run while Halodrol is a perfect second cycle prohormone to run.  It is a very versatile compound as users can cut, recomp, or bulk on it.  Users have reported on average a 10lb gain with a bulk, 7lb gain with a reduction of 1% to 2% body fat on a recomp, and a 3lb gain with a 2% to 4% reduction in body fat on a cut. Users will often stack injectables such as testosterone to their cycle. Regardless if you stack it or not, N2Guard must be run while on Halodrol to protect the liver.

A PCT (post cycle therapy) will absolutely need to be run since Halodrol will suppress natural testosterone production.  When run on its own a mini-PCT will suffice due to the short length.  I would recommend something like 4 weeks of the following:

*For a longer cycle where Halodrol is used as a “kickstart” such as testosterone for 12 weeks and Halodrol for 5 weeks I would recommend a complete PCT. This forum thread is what I would follow.

One of the most common side effects with any oral steroid is liver toxicity and this is no different with Halodrol.  This is due to the modification to allow the compound to survive the first pass through the liver.  N2Guard is required with all pheromone cycles.

Halodrol is a dry compound which means that it does not aromatize into estrogen.  This will prevent estrogen related side effects such as water retention.  Some of the possible side effects include atrophy of the testicles, acne, oily skin, and hair loss in men genetically prone to male pattern baldness.

The half-life of Halodrol is 16 hours.  This is very different than a lot of oral steroids that have much shorter half-lives.  The benefit of the longer half-life is that Halodrol can be dosed only once per day.

Halodrol is a great compound to run as a second prohormone / oral steroid cycle.  It will produce very lean mass gains and significant strength gains without any major side effects.  For the vast majority of users the mass gains seem to be more permanent in nature than many other compounds.  As always, this compound should be run only by someone who is in good condition and alongside a proper diet and nutrition program.

Want to read about Halodrol on our forums? Read on .....