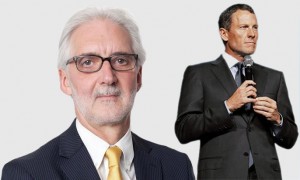 President of cycling's governing body (UCI), Brian Cookson, has remarked the lifetime imposed on disgraced cyclist Lance Armstrong may be cut to eight years if the 42-year-old American plays a role in the upcoming inquiry. Cookson remarked the former professional road racing cyclist would need to provide extraordinary evidence, which is something refused by Armstrong so far.

Cookson added to paraphrase something Lance once said, extraordinary situations can sometimes require extraordinary solutions and added he may be in a position where he can provide extraordinary evidence that will help those solutions. The UCI chief is hopeful that Armstrong testifies in the upcoming inquiry and wants the cyclist to provide details about the allegations of corruption and cheating during the period he raced. The present-day UCI chief's predecessors, Pat McQuaid and Hein Verbruggen, face allegations of under-handed dealings and it is widely believed that the donation of $125,000 by Lance Armstrong to the UCI in 2002, a period when the US agency showed that he was cheating, was for covering up positive drug tests.

The UCI head added it would be helpful if Lance Armstrong was able to give evidence to it but it's not absolutely essential and we know pretty much all of what Lance was involved in. He went on to add the areas where there is more to know about is around the other people involved in those activities at that time and that would be interesting to find out. I'm talking more about the doctors, the coaches, the facilitators and so on but, above all, he thinks the most important thing is the allegations that have been made about cover-ups and collusion at the UCI in the past.

Meanwhile, outgoing WADA President John Fahey said that it would take a miracle to see the ban on Armstrong lifted and that decision is in the hands of the United States Anti-Doping Agency. USADA chief Travis Tygart said it may reduce the ban imposed on Armstrong to eight years if he cooperated and remarked he's had plenty of opportunities to come in before now and there's no sense that is actually now going to happen and we'll see if there is still an opportunity for him to get any reduction.

In another development, a formal announcement was made by cycling's governing body, the UCI, and the World Anti-Doping Agency (WADA) that they will be working together on the UCI's inquiry into its past. A statement read that UCI President Brian Cookson and WADA President John Fahey have agreed to the broad terms under which the UCI will conduct a Commission of Inquiry into the historical doping problems in cycling. It was further disclosed that they further agreed that their respective colleagues would co-operate to finalize the detailed terms and conditions of the Inquiry to ensure that the procedures and ultimate outcomes would be in line with the fundamental rules and principles of the World Anti-Doping Code. The statement added that the two presidents want to work to help cycling move forward in the vanguard of clean sports.